Ivan Lewis MP writes about the progress made battling pneumonia in Bangladesh, and the lessons it shows us for applying UK aid. 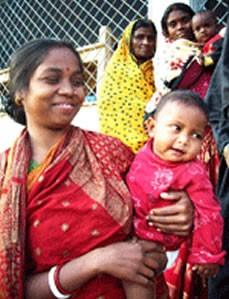 Today is world pneumonia day and I am in Bangladesh to witness firsthand the UK supported healthcare programs that are helping save millions of lives. In particular I have been following the work of the GAVI alliance, which is supporting developing nations to roll out life-saving vaccines against the biggest killers in the developing world including pneumonia and diarrhoea.

The Labour party has a proud reputation on international development and Gordon Brown was a key driver in ensuring the UK plays its full role in helping those less fortunate in the world.

In my position as shadow secretary of state for international development I am delighted to have the opportunity to see the work that we championed whilst in office, which the coalition government is continuing, is having life changing results in some of the world’s poorest nations.

In Bangladesh I have visited both urban and rural areas to see this impact, particularly with the roll out of immunisation services. I have spent today in Rajendrapur where I saw for myself how the different parts of the health system connect to ensure that mothers and babies have access to decent primary and secondary healthcare, including vaccines.

I met women who had been trained to be the village’s first point of contact for healthcare and were increasingly feeling empowered to play a pivotal role as community organisers. I spoke to one mother with a 20 day old baby who told me the Health Complex in Bhaluka gave her peace of mind.

But we also saw a recently admitted mother and her baby on the hospital ward who clearly needed urgent attention and reminded of the devastating reality that one child under five dies every twenty seconds from pneumonia.

This encouraging picture of vaccination services is replicated throughout the developing world thanks to the GAVI alliance.

At a global level the organisation has vaccinated 288 million children since its inception in 2000, which has saved an estimated 5 million deaths. These life-saving vaccines have been delivered to developing countries 10-15 years sooner than would have otherwise been possible.

Bangladesh still faces some challenges, which includes increasing the capacity of their cold chain to ensure that they are able to effectively roll out the pneumococcal conjugate vaccine.

But when I visited the central vaccine store in Dhaka and spoke with Dr Ashraf, the manager, I was encouraged by the plans that have been made to ensure this is scaled up in the next few months to allow the potential roll out of the pneumococcal vaccine in 2012 and rotavirus vaccine in 2013.

They are aware that there in no time to lose. Pneumonia is the biggest killer of children in Bangladesh, claiming 55,000 children’s lives every year. But they are determined to bring this number down, as quickly as possible.

The trip has been a great opportunity to see for myself exactly how UK aid is making an impact on the ground and to see why the GAVI alliance is so important. I hope that over the coming years they can continue to expand their operations and save even more lives.

• Will human rights have their day in Bangladesh? – Claire Leigh, December 10th 2010