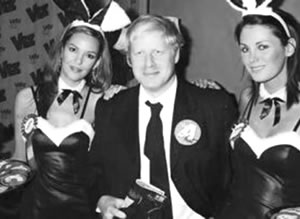 This weekend in London, 1,000 people met for the annual UK Feminista conference. Given its proximity to the Mayoral election, organisers arranged for a debate to take place on women’s issues in the capital.

All of the main political parties’ candidates were invited, but only Boris Johnson refused to attend.

Given the Mayor of London’s record on gender equality, it comes as no surprise he has chosen to back out of a chance to discuss issues with a room full of Londoners angered by the cuts and the disproportionate burden they place on women.

Boris Johnson has been turning back London’s progress on women’s rights since his election in 2008, from cutting resources and finance, to ignoring rising domestic violence figures in the city.

Each measure the Mayor has taken (or not taken, in many cases) on women in London is reason enough for him to be scared of the angry voices on Saturday.

As we’ll see below, Boris’s attitude is in stark contrast to that of Labour’s Ken Livingstone.

Last month, an article in the Evening Standard covered the progress made on women’s rights in London throughout Ken Livingstone’s time in office as both leader of the Greater London Council and as Mayor of London:

Across the country, in the offices of local councils, campaigns and charities there are men and women who fought the bruising equality battles in London and recall Ken from the frontline.

Journalist Joshi Herrmann quotes Linda Bellos, a black Jewish lesbian and leading feminist activists in the 80s, as having recalled:

Ken was among the first to seriously put resources into women’s issues – there were funded women’s centres where women could go for advice on birth control or domestic violence. This was a new politics.

When in office, spending on Livingstone’s Women’s Committee totalled more than £25 million, and the positions of Women’s Adviser and the London Domestic Violence Strategy Team helped see rape and abuse rates fall, while introducing the London Living Wage meant more women on low paid jobs were lifted out of poverty.

Under Johnson, much of this progress has been unpicked.

In Boris’s 2008 election manifesto he pledged to “protect women in London”. Yet one of the first moves he made in office was to axe the role of Women’s Adviser at City Hall and five posts from the London Domestic Violence Strategy Team. Under Johnson, the scheme, which contributed to a 57% reduction in domestic abuse murders, had £90,000 immediately removed from its budget.

The Safer Travel At Night Board, a measure that contributed to reducing cab-related sexual offences by 46%, was also scrapped by Johnson.

Last year’s campaign to get Boris to ‘Keep his Promise’ over funding for Rape Crisis Centres was a huge embarrassment for the Mayor, and forced him to u-turn on abandoning plans for three centres in London. The funding for the centres is still £489,000 short of the Mayor’s original manifesto pledge.

And now the Tory Mayor has come under fire again for failing to confirm whether funding will continue next year, and for failing to tackle the rising rape figures in the city.

The London Childcare Unit, which supported London boroughs in providing affordable places for children from low-income and single parent families – 90% of which are women – has also been abolished, a move that has disproportionately hit young mothers in London much harder than any other group.

The Capital Woman conference, an annual event addressing women’s issues which began in 2001 and was attended by more than 3,000 women in 2008 was also immediately cancelled by Boris upon him taking office.

The London Conservatives, who currently have a majority at City Hall, have only one female Assembly Member.

Boris Johnson’s Mayoralty has not only failed to protect women’s rights in London, it has systematically removed the strategies that were in place and making progress; Livingstone, meanwhile, has ensured women’s issues will play a central role in his election manifesto and that fighting for gender equality will be put back on the agenda if he becomes Mayor next year.

Judging by the reception on Saturday, it is clear women in London are angered by Boris’s regressive cuts and failure to show his face and justify them. As 52% of the electorate in London, women are not a group to be dismissed: we must fight back and ensure we are a decisive force in next year’s Mayoral election.