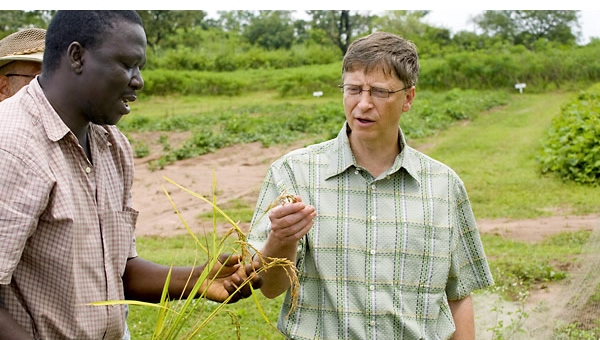 Bill Gates told the G20 today that innovation was key to solving the world’s problems, saving lives and prosperity for all.

Gates presented his “Innovation with Impact: Financing 21st Century Development” report (pdf) to world leaders in Cannes this afternoon, outlining the steps that should be taken to bring about a fairer, more equal planet.

Outlining the value of international aid, and the lives saved by advances in innovation, he said:

“In the past 50 years, a billion people were saved from starvation by advances in agriculture. Health has improved in stunning ways, thanks to innovations like vaccines. In 1960, 20 million children under the age of 5 died. In 2010, fewer than 8 million children under 5 died. The world population more than doubled during this time, which means the rate of death has been cut by over 80 percent.

“Aid generosity has played an important role in these successes.”

On the importance of aid and the need for governments to maintain Overseas Development Assistance (ODA) in straitened times, he added:

“Times, some people will say rich countries should cut their ODA. They should not. Not only because they have made promises, but also because important pieces of the development agenda won’t be addressed without assistance. ODA spurs innovation by funding pilot projects that poor countries would not undertake themselves…

“One stark way of looking at it is to consider the death toll from AIDS. It costs approximately $450 per year to treat a person for AIDS. A donation of $450 to the Global Fund to Fight AIDS, Tuberculosis, and Malaria, for example, keeps somebody alive for a year and helps prevent the disease from spreading.

“Conversely, every $450 that isn’t forthcoming represents a person the world is willing to let die from a treatable disease. Sometimes, it’s a simple question of money…

“I understand the need for belt tightening in downturns. But the fact is aid accounts for about 1 per cent of public spending in most donor countries. That amount of money isn’t causing the world’s fiscal problems, and cutting back on ODA isn’t going to solve them. Aid is a small investment that generates a huge return. Those are precisely the investments we should spare when it’s time to make cuts.”

“Key innovations like new seeds and vaccines – and new ways to deliver them to the poorest – can multiply the impact of the resources we’re already devoting to development. We’ve made a big difference, but we can improve the basic tools of development by making them cheaper, easier to use, and more efficient – or by inventing wholly new tools.

“One of the newest resources for development – and potentially one of the most transformative – is rapidly growing countries’ capacity for innovation. Countries like Brazil, China, India, and Mexico are in a great position to work closely with poor countries because they have recent experience in reducing poverty, as well as enormous technical capabilities.”

The inspirational, life-saving examples of innovation and international cooperation cited by Gates include:

• A new variety of rice, specially bred to survive underwater, being grown by farmers in flood-prone areas of India where crops are regularly wiped out by standing water. In the next six years, up to 20 million farmers will plant the new varieties.

• A decade ago, a million children a year died from malaria. The most common treatment, chloroquine, was innefective. Now, there are new drugs and mosquito nets. Malaria deaths are down 20 per cent in 10 years, and a malaria vaccine is in late stage trials.

• An institute in India recently developed a vaccine for Meningitis A, the first ever vaccine created specifically for poor countries. The manufacturers used raw materials from a Dutch company and a technology transfer from the States, a process started when African leaders requested a better weapon against meningitis epidemics.

• Going back three decades, Brazil has been working with Japan to help poor farmers in Mozambique grow soybeans.

• China has recently launched the “Green Super Rice” partnership, to help develop adapted varieties of rice with 15 poor countries in Africa and South Asia. Africa already accounts for approximately one-third of global rice imports and demand is growing – so helping African farmers increase rice production is critical for food security on the continent.

Gates concludes his report by saying:

“Scientific and technological innovations will allow us to solve problems that cause significant misery and hold societies back. A malaria vaccine, for example, would change the economic outlook for Sub-Saharan Africa. Better seeds for the crops that poor people rely on – cassava, maize, millet, rice, and sorghum – would feed billions, improve nutrition, and guarantee food security for the world.

“Another kind of innovation – a fundamental shift in the way we think about development – will provide amazing opportunities. It used to be that the world was, roughly speaking, one-third rich and two-thirds poor. Now, the absolute number and the proportion of dynamic, healthy, highly educated countries are much higher.

“That has been good for everybody, because it means a more prosperous and stable world. It also means that there are now more countries that have more to give to development. When I see the mix of countries around the G20 table, I am excited about our ability to capitalise on this… We can do much more to promote innovation for development.”

This graph explains the Options for Development Financing and Spending, as laid out in the report: 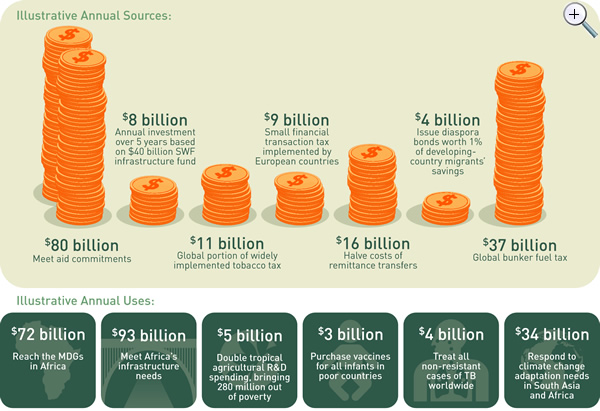 And please see this video to find out more:

18 Responses to “Gates tells G20: Innovate, lead and donate to save the world”