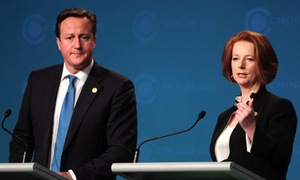 The clean energy legislative package, known locally as the ‘carbon tax,’ has at its core the introduction of a price on carbon from July 1st 2012. The legislation previously passed the House of Representatives on October 12th and will now go to the Governor-General for Royal Assent.

“Today Australia has a price on carbon as the law of our land.

“This comes after a quarter of a century of scientific warnings, 37 parliamentary enquiries and years of bitter debate and division.

“Today our nation has got this done.”

The carbon pricing imposes taxes on Australia’s 500 biggest polluters who, according to government figures, are responsible for 60 per cent of the nation’s greenhouse gas emissions.  The 500 polluters will pay a fixed price of AUD 23 for every tonne of carbon they release from 1 July 2012, before moving to a full emissions-trading scheme in 2015.

Under the plan, the government is offering compensation to nine out of ten households for increases in costs of living. According to government estimates, average households will see cost increases of AUD 9.90 per week, while the average assistance will be AUD 10.10 per week.

In a modeling report on carbon pricing in July 2011, the Australian Department of Treasury outlined that Australia’s economy will continue to grow with the carbon pricing mechanism and that its effect will be to slow growth by only 0.1 of a percentage point per year.

The carbon pricing scheme has come under huge pressure from Tony Abbott’s federal opposition, which has promised to repeal the laws if elected to office.  A recent survey shows that public opposition to the carbon tax rose one per cent from August to November 2011 to 57 per cent.