Alex Hern runs over the “best” of Simon Heffer’s columns, and details how to write one yourself, so you don’t have to read his. 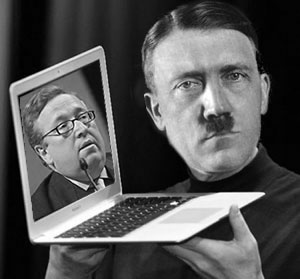 Eight months ago, Left Foot Forward brought you the definitive guide on How to Write a Richard Littlejohn Column. Now, in our ongoing quest to ensure that no-one need read Right Minds again, we bring you number two in an infrequent series, a three step guide to writing a Simon Heffer Column.

Angela Merkel doesn’t communicate using phones, email or post; when referring to her correspondance, the correct terminology is “a Führergram from Berlin.”

Don’t actually use the name Germany, instead refer to the “Fourth Reich”, and when discussing politicians who agree with the European consensus, like Lukas Papademos, their rank is “gaulieter”.

Whenever Germany is exercising power, don’t forget to refer to the 1930s:

“Indeed, never has there been a better time since the 1930s for an aggressor to challenge the supposedly civilised world.”

If your piece is about economics, the Daily Mail audience may get bored. If you pretend you’re writing about war, everyone will get very excited!

“Any fiscal union would comprise only a few countries — those whose economies are strong enough to withstand Germany having to tell them how to run their own affairs — unless joined by other masochistic nations that relish the  occasional kick from the jackboot.”

Or equating economic pressure to warfare:

“Once, it would have taken an invading military force to topple the leadership of a European nation. Today, it can be done through sheer economic pressure: it might be that within a few days the Germans — along with their French allies — will have secured regime change in the two most tiresome countries in the eurozone.”

If there’s a point you want to make, make it! Don’t worry about what’s true – it’s not as if the Mail has fact-checkers, after all.

So if you want to write this:

And if marriages are not to be arranged – and of course they should not be – what effect would a change of dynasty have on the subjects of the Crown? Suppose the Prince of Wales’s elder child had been a girl. Suppose she had married the male equivalent of Kate Middleton.

This would mean that for several generations the Royal Family would take its name and pedigree from a pair of party planners.

But if a royal princess marries into a foreign royal family, unions of Crowns are still possible, with all that entails.

Then write it! So long as you don’t remind people that we’ve actually already had one Queen marry a German prince, and another Queen marry a Greek prince, and that we are not, to the best of my knowledge, part of a Graeco-Germanic empire, you’ll be fine.

And although some people might argue that reasoning that with cognatic succession in 1901:

“We might have ended up twenty-one years later as one of Hitler’s provinces.”

is reasoning in bad faith, those people don’t have a Daily Mail column. Which means they basically don’t exist, right?