As thousands of students march on London, Laura McInerney reports on the positives and negatives of the UCAS consultation document, which provides a glimmer of hope. 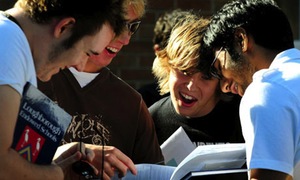 Laura McInerney is a teacher in East London, works as a policy development partner for LKMCo and is a Teach First ambassador; with students marching through London in protest at the marketisation of universities, she takes a look at a less reported shake-up of higher education

After years of battling to secure reform in the UCAS university application process Labour eventually gave up. Can the coalition government now take up the baton and push it through? UCAS have released a consultation document to find ways forward but the outlook is far from rosy.

Currently students apply for university at the start of their final A-Level year. There are two entry dates: October 15th for Oxford and Cambridge, medical, and law applicants, and the January 15th for all others. Universities use student GCSE, AS-Level and predicted A-Level grades along with a written personal statement and a teacher reference to assess applicants’ suitability.

More than half the time, however, the predicted grades are incorrect and only 10 per cent of students receive three correct predictions.

In 2009, UCAS introduced the ‘adjustment’ system, a facility for students to upgrade after receiving their results if they bettered the grades of their first-choice university. A student who held an offer of an AAB, but received AAA, could call adjustment and find a place at a university with higher requirements based on the assumption that some who held offers at that university would not have made the grade.

A clearer and long-posited solution to the problem of students missing or exceeding predicted grades is delaying the application process until the release of final A-Level results.

As exams are now scanned and sent electronically to examiners, alongside online scrutiny and normalisation of exam marks, the process is now much quicker than ever before. If students began their exams a few weeks earlier – at the beginning rather than end of May – the results could be ready before colleges close at the end of July enabling students to apply for university over the summer clear in the knowledge of their grades.

While the solutions sounds so sensible one could be forgiven for thinking it should have been implemented five years ago with the introduction of electronic examination processes, one must consider why it was that Labour – who first suggested this change in 2004 – failed to follow through to success. The fact is the devilled detail shines a light on the problems such a system would cause for the most disadvantaged students in the system.

UCAS’ applicant research shows that contrary to expectation students are ‘generally happy’ with the timing of the current application process.

Of more concern is the fact that students who apply in good time before the January 15th deadline are more likely to snag places before others have even applied. Early applications are more likely to be from candidates in independent schools where class sizes are smaller, meaning the burden on teachers to write references is lower, and where students’ parents are more readily able to offer advice to their children speeding up the process.

Further issues for students include the last-minute nature of financial and accommodation arrangements due to the short period of time between confirming a university place and starting the course.

As a sixth form manager I have sat with students frantically weighing up the cost of housing while on the phone during the clearing process. Though they have accepted places in panic they later realised the last-minute private accommodation they would now need to live in is simply out of their financial reach.

Equally, every year thousands of students fail to get their university loans delivered on time; if a truncated process exacerbates this risk the likelihood will be that the most financially vulnerable students will not start their courses at all.

UCAS also note that one in three participants find the application process too complex and they desire more help. If students receive grades just as schools close, how will even the current level of support be maintained? Giving students the confidence to apply to university – especially if they are from a family without a history of higher education – can be time-consuming.

My team and I have coached students to ring admissions tutors and sat nearby for moral support while they did so. We’ve printed Google maps, taken students on long bus journeys for open days, listened to hours of tears and concerns, organised care for parents or siblings that the student is primary carer for, educated countless professors on the nature of ‘non-traditional qualification’ and written hundreds and hundreds of carefully tailored references.

Some students have parents willing and able to take up this mantle, many don’t. Plus, having taken calls from students struggling in internet cafes to make the UCAS form work (annoyingly it launches as an often-blocked ‘pop-up window’) we must remember that 23 per cent of households do not have an internet connection.

If UCAS applications must happen over the summer months then it must be matched with a commitment to giving access to computers and teachers or careers advisors otherwise the most disadvantaged students will be facing sky-high barriers to their education.

A second sticking point in the previous negotiation for post-qualification application was the impact on university interviews, not just at Oxbridge but also many visual and performing arts courses.

Even if the will existed among university tutors to work during the long teaching break, many universities increasingly rely on the income generated by renting out university facilities to businesses and summer schools. Adding an application process of over a thousand students to this mix will be unwelcome and uneconomical.

All, however, is not lost. Two suggestions in UCAS’ consultation documents show promise though they have been lost in the media hype.

First, to address the fact that early applicants – predominantly from independent schools – tend to secure places before others have even applied, UCAS proposes a ‘gathered field’ process. Applicants would only be considered after a set entry deadline and all offers would be released on the same date – probably in March – eliminating the current problem of students waiting until the summer term before hearing back from all their choices.

Giving students a deadline for accepting offers would allow for a second ‘re-application’ phase before the summer. This application would use predicted grades based on students’ January re-sits and third modular exams diminishing the likelihood of inaccurate predictions.

A second and far more radical idea is the suggestion that university terms begin in January.

An ideal timeline would involve students receiving their A-Level results in July before taking part in an admissions process similar to the current one, but with fewer choices and more tailored to the results already received. The process would culminate with definite offers early in November. Colleges and school could provide moral and practical support in the autumn term and interviews would be undertaken during September, a less lucrative time for facility rentals.

In this January-start scenario a place scramble is still possible but it would, at least, be a well-supported scramble with teachers providing support rather than a lonely affair for students with ill-informed families. The eight clear weeks before courses start also means more time for financial and accommodation arrangement-making.

A January start-date for universities means no need for lecturers to change working practices; the summer months will still provide a long teaching break invaluable for research and writing. A big impact might be felt by graduate recruiters and businesses taking in annual cohorts.

Undoubtedly a four month shift to the university start date would throw up more questions. Can all businesses take new graduates in January? How does it affect international students? But if this suggestion of a four month shift is making anyone’s stomach lurch with anxiety then bear in mind that is precisely how the seven month UCAS application shift feels to schools and admissions tutors. It is a huge psychological shift with enormous practical implications.

In 2006 Graeme Davis, in charge of the same proposal, said:

“There is no doubt that PQA is proving problematic.”

A year later the idea was ditched. Let’s see how far it goes this time.

• The rich should not be allowed to buy their way into the best universities – Sally Hunt, May 10th 2011

• University numbers up but percentage of successful applicants down – Sally Hunt, January 21st 2010