Ed Jacobs reports on the Ulster Unionist Party’s calls for a move to opposition in the Northern Irish assembly, which has strong support from their membership. 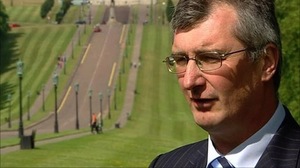 As the SNP used their conference over the weekend to put forward its road map towards independence, in Northern Ireland, the Conservatives’ erstwhile and one time electoral allies, the Ulster Unionist Party, failed to get the press they will have hoped for a party whose former leader David Trimble was one of the architects of the Good Friday Peace agreement.

In a sobering assessment in the Irish Times, Gerry Moriarty wrote:

“Ulster Unionists desperately require a realisable path of renewal, and some Fine Gael-style luck, if they are to arrest the decline in their party.

“Plenty of grey hair and shiny pates and quite a number of empty chairs were in evidence at the annual conference of the Ulster Unionist party in the Armagh City Hotel on Saturday.

“Evidence too of a party treading water, trying to stay afloat until some as-yet-unseen rescue vessel comes along. At the moment, the UUP is a party not waving, but drowning.

“The May Assembly elections are past and the Westminster elections of 2010 are well out of the way. These are elections that are now best forgotten, as the UUP dropped from 18 to 16 assembly seats, thus also dropping from two to just one ministry – the same as the SDLP – while the Westminster poll was even worse, with the UUP for the first time in its history failing to elect a single member to the House of Commons.

“Still, it could be worse. At least, as leader Tom Elliott noted in his keynote address to the 350 or so delegates, for once in Northern Ireland, no elections are imminent. There is a period of grace to try to rebuild and revitalise.”

In his speech to the party faithful, Elliott was clear in his belief that the size of government in Belfast had got too big and was ripe for a cull; he argued:

“Now that the review of the justice minister appointment process is fast approaching – it is due in May 2012 – there is a perfect opportunity to streamline and develop a more efficient Northern Ireland government. All parties have said they want to reduce the level of government structures at Stormont – now is your chance.

“With the ongoing review we have now time to reduce the current number of government departments from 12 to, let’s say, at least eight. That is a reduction of one-third of that administration, right at the heart of the executive.

“I now challenge others to follow the lead of the Ulster Unionist party – let’s cut that burden on our taxpayers, make ourselves more efficient and give the public value for their money.”

Elliott’s remarks were a clear attempt to put flesh on his broader thesis that it was time to for Stormont to practice politics as usual and end its system of mandatory coalitions. In calling for the size of government to be cut, he also had a not to subtle message for his party – it’s time to provide proper opposition to the executive, a message that seems to be going down well within his grassroots.

Reporting on a fringe event, for example, hosted by the youth wing of the party, Sam McBride for the Newsletter noted the extent to which rank and file members, including the former leader, Lord Empey, felt it was time for the Good Friday agreement to evolve to allow for an opposition.

At the Belfast Telegraph, meanwhile, providing details of a snap poll of members which saw 80 per cent supporting the idea of an opposition emerging within the assembly, its editorial concluded:

“The idea of forming an opposition party has been mooted for some time, and there is no argument for further delay, but it will require decisive leadership. This has not been, by any means, the hallmark of the UUP of late, but Tom Elliott was also given a strong endorsement in our snap poll with more than 80 per cent support.

“He now has an opportunity to move forward, and to give his party a clear and potentially significant role in Stormont’s deliberations. The whole stultifying process would benefit from some rugged and honest opposition.”

With Sinn Fein and the DUP having successfully come together in Government, Elliott’s “big idea” is one which should be considered seriously as a mark of a political system of Northern Ireland maturing, and being ready to practice politics as usual. Whether the UUP however are the right vehicle for get such a message across remains to be seen.

12 Responses to “UUP renew calls for opposition at Stormont”