Taking a look at four issues - economy, unemployment, immigration/ race relations and Europe, we can see that while over a third of those surveyed identified the economy, and both immigration /race relations score around ten per cent, the number of respondents who answer Europe is statistically insignificant. 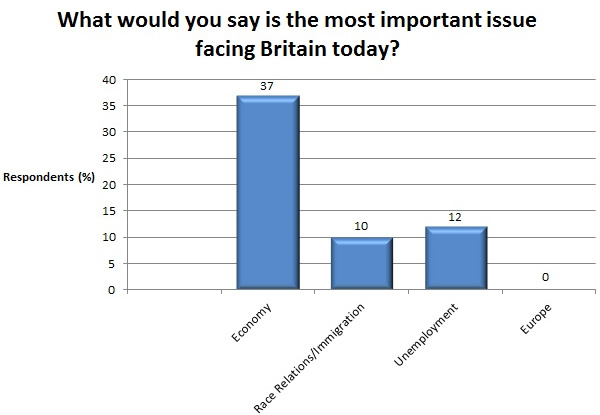 While the Conservatives get themselves in a tizzy over the vote on whether there should be an in/out referendum on Europe, it is hard to overstate how irrelevant the vast majority of voters find the issue to their lives.

Over at Political Betting, Mike Smithson’s post on recent YouGov data shows that there are very few new votes for the Tories on the issue. Furthermore, looking at the Ipsos-Mori issues tracker data, it is clear that the general public simply don’t care about Europe.

As Smithson regularly points out, Ipsos-Mori provides particularly useful data, because it goes back decades, and respondents are asked “What would you say is the most important issue facing Britain today?” – without categories being provided. There is no ‘push to a given answer’.

It’s been that way for months: 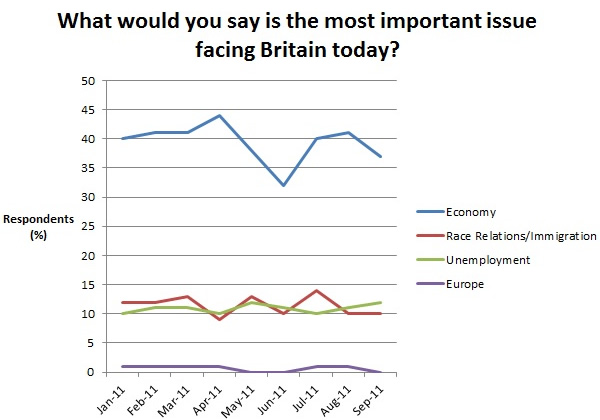 There are good constitutional reasons for an in-out referendum on the EU: It is more than 30 years since the last one, the EU represents a significant transfer of power from Westminster and the situation is, everyone agrees, markedly different from that outlined in 1975.

However, as the Conservatives engage in turtuous internal wrangling over the issue, they may well just appear completely out of touch with what is worrying most people. Insisting all politics and policy lead back to Brussels – immigration and unemployment for example – will just make them look even more weird.

• Labour policy review will consider case for an ‘in or out’ Europe referendum – Sunder Katwala, February 11th 2011

38 Responses to “Tories may care deeply about Europe, but no one else does”