Alex Hern argues that the creeping privatisation of areas which used to be private is leading to more and more difficulties in protesting peacefully and legally. 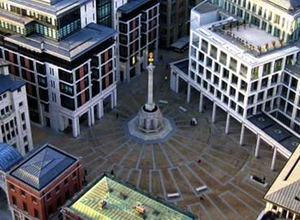 One of the most common responses to Occupy London is to question why exactly they are camped outside St Paul’s Cathedral. After all, aside from its location, the Cathedral has little to do with the issues that the protesters are campaigning against. Shouldn’t they be somewhere else?

The answer of course is that they should; they wanted to; and would be if they could. The original plan was to occupy, not St Paul’s, but the London Stock Exchange based next door in Paternoster Square. Although this would hardly have resulted in fewer complaints (as we have seen, some people will find any excuse to condemn a protest) it may have made it easier for Occupy London to gain support in those crucial first few days.

So why didn’t they? Because Paternoster Square, despite appearances, is not a public square. It is a private development that is owned by the Mitsubishi Estate Company and is open to the public 24 hours a day, which just so happens to be on the site of a previous public square. When the protesters came along Mitsubishi Estate Company, as is their right, decided to close the square indefinitely, and obtained a high-court injunction preventing anyone from entering.

Their options are just as curtailed further afield, as well. Canary Wharf, which is almost as big a centre for finance as the City is, has a lovely big park in the centre of it. Unfortunately, that park, as with 99 per cent of the land in Canary Wharf, is owned by the Canary Wharf Group. Again, access is conditional; the company may choose to allow a protest, or they may not.

Boris Johnson – and Ken Livingstone before him – has been instrumental in making London the home of international finance. Want to camp outside City Hall? Unfortunately, More London Estates is unlikely to allow that.

Occupy a major shopping district, so as to draw attention to the problems of consumerism!? It had better not be Carnaby Street, Westfield Stratford or Westfield White City, although if you’re lucky and the police permit, you may be able to march down Oxford Street or Regent Street.

All of these areas were once public land and therefore the public were free (within reason) to protest on them. A private company on private land can deny any person access at any time for almost any reason. That is fine if that private land is, for example, a shop or an office block. But when it is a street, square or park, and when it is indistinguishable from the private land around it, it creates problems.

Concern over this privatisation of public space isn’t new. Naomi Klein highlighted it ten years ago in No Logo, although then her prime concern was its link to the growing ubiquitousness of advertising. And whenever a new corporate development uses words like “town hall”, “village green” or “central park”, there is always someone arguing that whatever they may be called, these private replacements for public spaces cannot fulfil the same role.

But it is only now that we really see what that difference means in practice. If all you do in shopping centres is shop, why would the owners try to stop you? When you are making the owners money, then of course there is no problem. It is when you try to do other things – busk, sleep rough, or protest – things which don’t earn a profit for the owner of the space, that you learn what is and isn’t allowed.

Occupy London have filled up St Paul’s Churchyard. They have mostly filled up Finsbury Square, which is across boundary lines in Islington. Unlike some, they have had the good sense not to go to the war memorials in Tower Hill. Public space is running out. The answer to “can’t they go somewhere else?” is becoming “no”, and the command “go somewhere else” is becoming “stop protesting”.

I think it’s a travesty that St Paul’s chose to close its doors just as I have a deep sympathy for the employees of the Sainsbury’s in Paternoster Square, who have not been allowed to work for nigh-on two weeks. However, the fact that Mitsubishi Estate Company would rather shut up shop than put up with some tents is their decision, not the protestors’. They merely want to exercise their right to protest.

As the cases of Maya Anne Evans and Brian Haw show, that is not too easy in the seat of political power. Occupy London is demonstrating that it is no easier in the seat of economic power.