The real challenge facing policy makers is not just improving the pay of those at the bottom rung of the ladder, but also helping people to climb up. 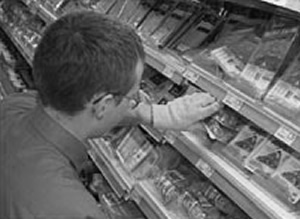 The National Minimum Wage rose by 15 pence per hour to £6.08 over the weekend, providing a timely boost to the incomes of the very lowest paid workers. On Sunday, new research by the Resolution Foundation put that rise into the broader context of low pay in modern Britain.

Around one fifth of all employees in the UK earn less than the Living Wage, amounting to 5 million workers in total.

Although most – but by no means all – workers now earn more than the legal minimum, millions still earn less than is needed for a minimum standard of living.

Perhaps the starkest finding from the work, though, is that low pay affects some groups far more significantly than others.

The figures for part time workers are particularly worrying in light of recent labour market trends, with significant growth in part time work since 2008, a great deal of which has been driven by people working part-time because they could not find full-time work.

What do we see when we look at the data for different sectors of the economy?

The retail, admin and transport sectors are the biggest offenders in terms of low wage work. 60% of all those in sales occupations earn less than the Living Wage and the same is true of 57% of people in elementary occupations (labourers, waiting staff).

By contrast, as you’d expect, professionals and managers are least likely to find themselves working for low pay, as Chart 1 shows. 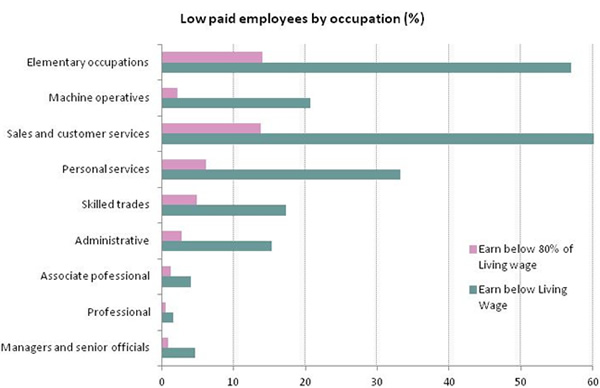 It may seem obvious that ‘better jobs’ pay better wages – but put this together with an understanding of social mobility and the variation becomes a serious problem. Recent research (pdf) shows people in low paying occupations are also less likely to be able to work their way up the earnings ladder over their own lifetimes.

The real challenge, then, is not just improving the pay of those at the bottom rung of the ladder – but also helping people to climb up.

16 Responses to “Lifting the lid on Low Pay Britain”