The Resolution Foundation’s Felicity Dennistoun explains the IFS’s figures for child poverty, and puts them in the context of the wider welfare reforms. 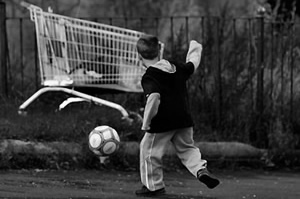 By Felicity Dennistoun of the Resolution Foundation

As has been widely reported, new figures published today by the Institute for Fiscal Studies forecast that the number of children in poverty is set to rise.

Specifically, child poverty will rise continually during the first half of this decade and stay at approximately the same level until 2020, when there will be over three million children living in poverty in the UK. The figures about adults are similarly depressing; by 2015 6.6 million working age adults will be living in absolute poverty.

In this context the targets set in the Child Poverty Act, just last year, of reducing absolute child poverty to 5% and relative child poverty to 10% by 2020, seem at best woefully optimistic and at worst wildly unrealistic. The reasons behind these gloomy forecasts reveal why we’re moving in the wrong direction when it comes to the eradication child poverty.

IFS figures show that real median household income is forecast to be 7% lower in 2012-13 than it was in 2009-10, and to remain below its 2009-10 level until at least 2015-16. These figures are of serious concern given that by this point the economy should have made a convincing return to growth. Stagnating wages only tell part of the story though; child poverty is an area where politics makes a big difference.

Graph 1 below shows projections for child poverty both with and without the government’s tax and benefit reforms. As the dotted line shows, without government policy child poverty would be markedly lower. So where are things going wrong? While the planned changes to be brought in under Universal Credit should take us a step forward on poverty rates, the impact of indexing benefits to CPI instead of RPI will take us two steps back. 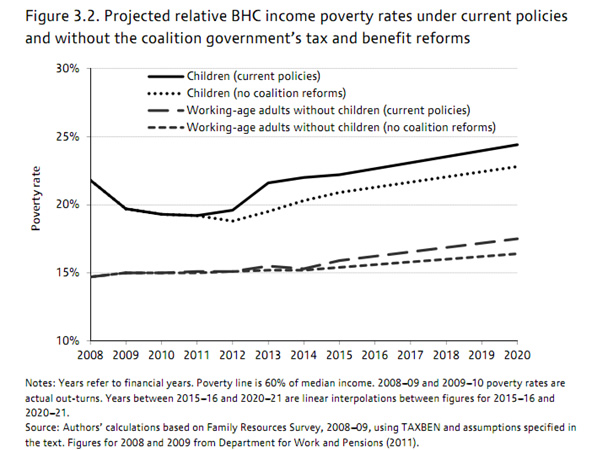 And while Universal Credit promises to make work pay, the figures reveal it just won’t do enough.

23 Responses to “The coalition is actively increasing child poverty”