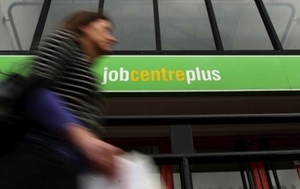 It’s hard to be clever about this month’s labour market statistics (pdf) – just listing the items in this avalanche of misery is going to take time.

Let’s start with the headlines:

• The unemployment rate rose 0.4 points to 8.1 per cent, also the biggest increase since the recession;

David Cameron claimed at PM’s Question that there are more women in work than “at the time of the election”. As Nicola Smith has pointed out, this is true, but only because there are nearly 200,000 more adult women in the population – the working age female employment rate has fallen slightly, from 65.5 to 65.4 per cent.

There had been some speculation that youth unemployment might pass the million mark. In the event, this didn’t happen.

As Graph 1 shows, the claimant count measure of unemployment also rose, by seventeen thousand, to 1.597 million in September – this measure has now been rising steadily since the spring:

The number of redundancies is up six thousand to 150,000 and job vacancies are stagnating – a 1,000 rise to 462,000 is neither here nor there and the number of unemployed people per vacancy is unchanged from last month, at 5.6. The blackspots in this month’s figures include Haringey, with 25 unemployed people for each vacancy and Blaenau Gwent and Middlesbrough, both with more than 18 (my colleague Anjum Klair has listed the ten worst around the country.)

As Graph 2 shows, there has been a large reduction in the number of people working in part time and temporary jobs – falls of 173,000 and 79,000 respectively. This reverses a trend that had become well-established since the start of the recession:

Of course, the usual warnings about over-interpreting one month’s figures must apply here.

If this becomes a trend, it could be worrying – it might be a sign of the end of the ‘labour hoarding’ that characterised the recession. Businesses held on to valued workers because they were concerned that they might be held back by staff shortages in the recovery; if corporate Britain has decided that the recovery has come to an end before it began they may revisit that decision.

One further hint that this could be happening lies in the most recent productivity figures, which up till now have been very depressed: output per hour rose 1.3 per cent in the second quarter of 2011, the biggest rise since before the recession.

That is one of the possible drivers of today’s terrible results. Other views are available; apparently, Chris Grayling thinks it’s all the fault of foreigners:

“It’s no doubt that these figures are a significant step in the wrong direction. I think they are a consequence of what’s happening in the eurozone, we are beginning to see the impact of the financial uncertainty on our labour market.”

This is a strange response. Today’s figures are for the period from June to August and the labour market is famously a “lagging indicator”, so it simply isn’t possible for these results to have been caused by the recent troubles in the eurozone.

The current uncertainty will have an effect on jobs, especially in manufacturing and other exporting industries, but  there hasn’t been time yet for it to show up. The simplest – and most likely – explanation for today’s figures is that we are seeing the impact of more than a year of stuttering demand.

26 Responses to “Forget Grayling’s excuses: Record joblessness is solely the fault of this government”