Carl Roper of the TUC defends the record of unions against the ideologically driven attacks of swivel-eyed right-wing Tory Priti Patel. 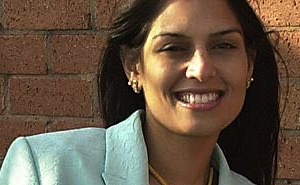 No doubt euphoric her year-long assault against union reps has at last been picked up by the government, Priti Patel, Conservative MP for Witham and former press officer for the late Jimmy Goldsmith’s hard right anti-Eurpean Referendum Party, has launched another rant against paid time off for union reps on the Conservative Home website.

Representing, as she does, a stream of Conservative thinking that despises both trades unions and almost all public spending, paid time off for union reps in the public sector is something of a perfect storm for her and others on the Tory hard right.

So blatantly ideological is Priti’s campaign that she’s finding it hard to maintain the pretence that it’s just about saving tax payers’ money. As such deliberate misinformation and misrepresentation of the facts becomes more commonplace and the claims about alleged misuse of facility time become more hysterical.

Nowhere in her piece will you find reference to the ACAS code of practice, recently revised, but introduced by a Conservative government as part of the 1992 trade union and labour relations act. The ACAS code sets out what paid time off can be given for and provides guidance on how much reps should receive.

Her claims about the lack of systems to ensure reps are accountable for what they do with facility time will be news to many reps and employers. I was a union rep in the Ministry of Defence in the 1990s and was required to complete a time sheet at the end of each week accounting for the union work.

In any case, the reality is that most employers know exactly what a rep is doing with their time off because more often than not they’re on the other side of the bargaining table representing members in disciplinary and grievance procedures or negotiating on pay, holidays, changes to working practices and other collective issues.

A clue to how reluctant Priti is to engage in a facts based argument is provided by her passing reference to the TUC’s report ‘The Facts About Facility Time for Union Reps’ (pdf) but complete failure to address its content, which is based on evidence taken from two government publications.

In the same way that a senior cabinet minister has recently been investigated for potential abuse of the ministerial code, there may be a small number of union reps who do not always use all of their time off for the reasons they are given it. But if they exist they would represent an incredibly small proportion of the total number of public sector union reps who not only improve the working lives of their colleagues but provide valuable benefits to employers too.

In the face of such scurrilous misrepresentations, the real facts about the added value that union reps bring to the modern workplace are worth repeating. Reducing working days lost due to work related injury or stress; helping to cut recruitment costs by reducing the number of early exits and saving employers money by reducing the number of Employment Tribunal cases are just some of the benefits.

We should be clear and see this campaign against union reps as part of a much wider war against unions and the right of working people to organise, elect those who will give them a voice in the workplace; defending their rights and helping them to ensure their working lives are free from fear of illness, injury or victimisation.

We see this when the prime minister can stand up and say he believes that the most basic workplace right is to have a job in the first place (and workers should be grateful for it) and when at the same time as its being made easier for employers to sack workers changes are introduced that will make it harder for workers to take bad employers to employment tribunals.

Unions ensure that the democratic rights and freedoms we enjoy are extended to the workplace, but in Priti Patel’s ideal world, neither these nor the Prime Minister’s rhetoric of “putting people in the driving seat” would apply once people ‘clock on’.

The TUC seriously questions the need for another review of facility time. This is not because we believe that unions or our reps have anything to fear, but simply because the last one, which included extensive consultations with employers and the CBI, took place just three years ago and in any case, many of the demands made by Priti in her article are already covered in the ACAS Code.

Nor do we believe there is any serious demand for another review from employers. Frankly they have more important things to worry about at the moment.

The voters of Witham are no doubt thrilled that the person that they sent to represent them in Parliament during the worst economic downturn since the second world war is spending so much of her taxpayer funded time on this issue.  Reducing facility time for union reps, as Priti Patel knows all too well, will create not one extra job and make no discernable impact on the deficit.

The figure of £30 million that Priti claims is ‘wasted’ on the salaries of union reps should be seen alongside total public expenditure of around £650 billion.

But it will make work less secure and workplaces less safe for employees and deprive employers of an important resource. And that’s too high a price to pay just to appease the anti-worker, anti-union ideology of Priti Patel.

• Unions, RDAs, and even the government led to a victory for Wolverhampton – Jack Dromey MP, October 7th 2011

• What kind of “civil disobedience” tactics will the unions use? – Dan Whittle, September 15th 2011