Ben Mitchell argues that the Occupy protests can only succeed in London if they build a broader left and enter electoral politics. 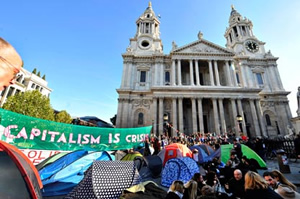 We’re starting to get used to the sight of people camping out in tents throughout a number of cities in the world. We have a pretty good idea of what the ‘Occupy movement’ wants; Occupy London has issued its own mini-manifesto.

The movement has even won support from some unlikely circles. In the US, a poll for Time magazine found 54% of Americans supportive of Occupy Wall Street.

However, and most significantly, an even greater number sympathise with many of its principal grievances, namely:

“Wall Street and its lobbyists have too much influence in Washington,” (86% agree) “executives of financial institutions responsible for the financial meltdown in 2008 should be prosecuted,” (71%) and “the rich should pay more taxes” (68%).

Disappointingly (or maybe that should be realistically), only 30% of those questioned believe the protest movement will have “a positive impact on American politics today,” with 56% saying it will have little impact at all.

And this is the trouble with the Occupy protests. Most of us are now aware of them; we’ve seen the images of make-shift kitchens, the library, the witty banners, and of course the inevitable sounds of someone in the distance strumming an acoustic guitar.

But, now what? How long do they stick around for? Surely the last thing they want to be is just a tourist attraction?

“The iron law of insurrection holds that it must grow in menace or lose momentum. Once it subsides into encampment, it becomes mere scenery.”

And in this sense surely he is right. Of course, we are only a couple of weeks into Occupy London.

In Spain, for example, the “indignados,” or “15-M” movement, as they are more commonly known, have been protesting for several months. Yet despite widespread support, their political impact has been negligible.

According to the political analyst Miguel Murado:

“Political movements have to be measured against their demands, and I can’t think of a single measure the government has taken or the opposition proposed that meets their [indignados] demands. So you have to say it’s a failure.”

But, this is to miss the point in the view of another Spanish commentator. Diego Beas believes that the protesters are redefining Spanish politics with:

“a hybrid and novel experiment of online and offline activism that has steered clear of the traditional and weary avenues of political engagement…[and] experimented with bottom-up networked approaches to challenge the rigid, top-down, party driven system.”

For him, it is all about not being drawn in to ‘ideological agendas…and [the world of] professional politicians.’

I can’t help but disagree.

The movement and the protests in the UK have naturally started out as something grassroots, but surely to have a lasting and very real sway over how things are done, they need to be able to have political influence. Without it, they will simply wither away, leaving in their wake an array of discarded tents and catchy slogans.

And this is where everyone’s favourite radicals, the Tea Party, come in. Over the last couple of years or so, they have successfully hijacked the Republican Party and steered it even more to the right (if that was ever possible), towards their own puritanical and evangelical agenda.

At last year’s mid-term elections, Tea Party endorsed candidates succeeded in winning seats for five senators and 40 congressmen and women. This represented victory for 32 per cent of all their backed election candidates.

Some argue that this number was fairly small and illustrates that the Tea Party brand isn’t as strong as it likes to believe, yet this is still an impressive showing for an organisation in its infancy. Of course, being funded by billionaires helps.

Its impact is felt when one glances at the current Republican candidates for next year’s general election. Proving yourself pure enough to satisfy Tea Party criteria still holds sway. Especially when current GOP favourite, Mitt Romney, is viewed with such suspicion by those in the Tea Party who see him as a tainted, corrupted, Republican.

It is about time that those on the Left came up with the UK’s answer to the Tea Party: a ‘New Left Coalition’ built on shared values and beliefs; a movement which comes together and embraces the key tenets of social justice, fairness and equality; in fact, many of the things that the Occupy movements are calling for, few of which could be described as outlandish or outrageous.

Most importantly, this coalition should avoid aligning itself to any political party, but instead seek to inspire a new set of, as well as existing, parliamentary candidates, willing to sign up to its goals, in return for support on the ground.

In practice, this would mean providing backing both before and during election campaigns. Thousands of volunteers ready to do the tireless, dogsbody work of door knocking, leafleting and phoning, in exchange for representatives in parliament who stand first and foremost for their supporters on the ground and not the party whips.

The supporters would come from all walks of life, all those who feel marginalised, ignored and excluded from society; unfair victims of the government’s cuts agenda, and most crucially, all those disaffected with mainstream political parties.

Yet in reality, this could mean endorsing a Labour, Lib Dem or Green candidate, so long as they agree to the New Left Coalition’s terms. Even a Tory one, though highly unlikely.

Now, admittedly, this means we urgently need to see more in the way of the open primaries that David Cameron spoke about in opposition. A system, imitating what commonly takes place in America, whereby the general public, and not just party members, are able to select their own local parliamentary candidates.

This would give members of local New Left branches the chance to scrutinise and ultimately plump for the person they feel best echoes their own objectives.

It would also be a long overdue wake up call to today’s complacent and detached politicians.

Ed Miliband has been making the right noises about ‘the squeezed middle,’ but he needs to recognise that it isn’t just the middle being squeezed, but the majority.

The Lib Dems, despite everything, still have politicians in their midst who could easily satisfy the demands of this New Left.

And in order for this to have any chance of success, this new coalition needs to find itself a stream of wealthy backers, sympathetic to its cause: a British George Soros or Warren Buffet.

This is just an idea, a work in progress. But, none of this is beyond the realms of possibility. The camps and the protests are a start, but they need to grow and develop into something more tangible, more vocal, more permanent.

In short, it’s time for the British Left to be as organised, as focused, and as determined as the American Right. They have the goals, the slogans, and desire for change. Now this needs to be translated into real political victories.

22 Responses to “Occupy London needs to catalyse a new Left”