Ed Jacobs writes about the concerning state of religious freedoms in Algeria, where a new government ordinance has effectively outlawed Christianity. 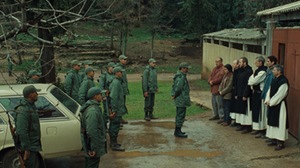 As the Arab Spring fast becomes an autumn of historic change across the Middle East, one country which has so far not seen the kinds of violence witnessed in Syria, Lybia, Egypt and Tunisia is Algeria.

In August, Sheikh Abdallah Djaballah, head of the Islamist opposition party, the Front for Justice and Development, warned that the Algerian government, headed by President Abdelaziz Bouteflika, could face an Arab Spring-style revolt if the government does not urgently fix social and political problems.

Algerian lawyers also saw themselves going on strike yesterday over proposed changes in the organisation of the profession which, they argue, will limit their independence and powers in court. All this in a county which had supposedly become a democratic state.

As Peter Oborone has written recently in the Telegraph:

“This coming December marks the 20th anniversary of the Algerian Spring, when free elections seemed to bring an end to a long period of ugly dictatorship. Yet those elections did not lead to the liberal democratic nirvana envisaged by Cameron and Sarkozy today.

“On the contrary, they were followed by a decade of hideously barbaric civil war, in which more than 160,000 Algerians died and the most unspeakable atrocities were perpetrated by all sides in the conflict.

“Even today, Algeria has not recovered. As a society, it is suffering from a kind of post-traumatic stress syndrome. The streets are empty at night – a legacy of the curfew imposed during the civil war years – the country is a police state and al-Qaeda has established its North African headquarters in the ungovernable south.

“As the Arab Spring embarks on its next stage, it is essential to ask: what went wrong in Algeria? This question is all the more urgent because the similarities between what happened then and what is happening in Egypt, Tunisia and Libya today are alarmingly close.”

Faced with such difficulties, and following a series of horrific attacks on the Coptic Christian community in Egypt, Alliance MP Naomi Long will this evening use an event in the House of Commons to raise the profile of the persecuted church and Christian community in Algeria, with this year seeing renewed pressure from the Algerian authorities on evangelical churches and individual Christians.

While the recent official recognition of the Eglise Protestante d’Algérie (EPA) is potentially a positive step, it has yet to be translated into increased religious liberty for this minority community.

It is estimated there are 25,000 Christians in Algeria. There is a small Roman Catholic community, mainly expatriates, but a rapidly increasing evangelical community, as many from a Muslim background, particularly Berbers, have become Christians.

Whilst the Algerian constitution affirms Islam as the state religion, it also provides for freedom of conscience, opinion, expression and assembly – and therefore, by implication, freedom of religion. However, despite being a party to the International Covenant on Civil and Political Rights (ICCPR), blasphemy laws have been used to punish theological dissent or non-observance among Muslims, and been invoked against Christians as well.

Of particular concern to campaigners was the introduction in 2006 of what is known as ordinance 06-03, which regulates the exercise of religious worship other than Islam. It forbids attempts to convert a Muslim to another religion or even to ‘shake the faith of a Muslim’, although it does not forbid conversion as such.

Christian books and manuals are rare in the country, and Christians do not feel free to carry Christian literature with them. Under ordinance 06-03 Algerians can be fined up to 1 million dinars (£8,370) and sentenced to five years in prison for printing, storing or distributing materials intended to convert Muslims.

In May, the president of the Protestant Church of Algeria (EPA), Mustapha Krim, was ordered to the police station in the town of Béjaïa at which he was informed that the Governor of Béjaïa Province had ordered:

“All buildings designated for the practice of religious worship, other than Islam, will be permanently closed down.”

The “Ministerial Directive,” issued by Algeria’s Ministry of the Interior, orders the permanent closure of all buildings designated for, or in the process of being designated for, the practice of non-Muslim religious worship in all parts of the country. The document refers to ordinance 06-03 concerning the “conditions and rules for the exercise of religious worship other than Islam.”

Speaking ahead of the meeting to Left Foot Forward, Stephen Rand, advocacy manager for Open Doors, an organisation that stands up for the persecuted church world wide called on the UK government to take action over the issue of religious freedom in the country and specifically seeking a rescinding of ordinance 06-03.

“We are hoping that the government will raise the issues that we shall discuss through the channels that they have open to them: either directly to the Algerian government or through the EU.”

With all eyes fixed on those countries currently in the midst of their own uprising, the international community cannot afford to let their eyes slip from other countries in the Middle East.

If there are any lessons to be learnt from Egypt, Lybia, Syria, Tunisia and elsewhere it is that there is a hunger across the region for freedoms from oppressive regimes. If such freedom is to mean anything however, it should have had its core an ability to accept and protect minority rights and the freedom of people to express and follow their religious beliefs without fear of intimidation.

19 Responses to “MPs to consider Christian freedoms in Algeria”