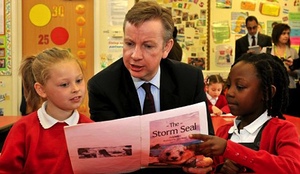 Michael Gove today gave his speech on education. The allocated slot was largely a back-slapping affair; indeed, almost three quarters of the time he’d been allotted was filled up with content-free puff. So little time was left for Gove to talk that it almost seems as though nobody quite trusts him to stay on message for more than 15 minutes.

Even light little pieces like a video-link to David Cameron, talking from a school in Manchester as children behind him force themselves to look round, two pre-recorded bits from different free schools, two speeches from headteachers, and one regulation schoolboy didn’t leave Gove quite in the clear, however.

There were a few cringeworthy moments buried within.

The first was after introducing the West London Free School, when a description of the school as “truly comprehensive” with pupils “from all backgrounds” was followed up with interviews with uniformly well-spoken middle-class children – exactly what people were worried would happen. “All backgrounds” apparently includes “so long as you aren’t working class”.

The second was the introduction of Sally Coates, the principal of Burlington Danes Academy in West London – set up by Labour in 2005, a fact strangely glossed over in her speech. The Tories seem to be glossing over the difference between academies and free schools in a way that many of their opponents will question.

The third was Gove himself, playing on a theme prevalent throughout the conference. Talking about a visit to a Chinese school, he says he was handed a book filled with academic journal articles written by the students, and presses the implication that the UK is facing enormous competition from overseas in leading quality in education.

Enough about the fluff, on to the content! Except, well, that’s tricky. There wasn’t a lot.

Gove did manage to highlight a worrying statistic from British education (albeit one much the same as that highlighted by Ed Miliband last week), saying:

“The big divide in English education is between rich and poor”

He pointed out how concerning it is that the top five private schools get more pupils into Oxbridge than 2000 state schools do. But he didn’t offer many ideas to correct this imbalance, other than explaining that he was angry at Labour for having allowed it.

Of course, he didn’t mention that state entry to (to pick one of the two) Oxford has risen by five per cent since 1996, from 41.6% (pdf) to 46.8, or that state school pupils now make up the majority of UK students accepted. Nor did he make any mention of the outrageous fact that the private schools which create this discrepancy are the recipients of, in effect, £120 million of public funding.

Instead, the solution apparently lies, as with much in this government, with fathers getting their act together:

“If you are there at your child’s conception, you should be there for the rest of its life”

Quite aside from the fact that Gove seems to think it is possible not to be there at your child’s conception (unless he is attacking the great scourge of the IVF father), there isn’t really any explanation provided as to how fathers being more present will help overcome an entrenched socioeconomic divide, the second largest in Europe.

Perhaps the Tories should have taken their plan to its conclusion, and got other people to speak for the full hour of Gove’s slot.