Michael Morgan Giles argues that Labour needs to do more to support the cause of freedom. 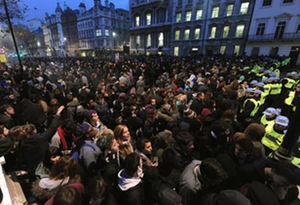 On Saturday afternoon we saw the irony of the police using kettling against peaceful protesters on our streets, whilst at the same time the Government presses ahead with the ‘Protection of Freedoms Bill’.

Kettling – a tactic which police use to control crowds – occurs by restricting the movement of people and often preventing their access to food, water and toilets for long periods of time.

Currently there is a case in the European courts, which is likely to confirm kettling is illegal – as it appears to contradict the Right to Liberty (Article 5 of the European Convention on Human Rights) and the Right to Freedom of Assembly (Article 11).

Furthermore, according to Observer journalist Mark Townsend, who was at the protests against the global financial system, the Police were also preventing legal observers from monitoring their activities under the guise of “preventing breach of peace”.

This practice, if proven is deeply concerning, as it undermines the concepts of natural justice and the right to a fair trial – two pillars of our democracy.

However, perhaps all of this should not come as a surprise. A slow erosion of freedoms has been ongoing for a number of years – with the latest being the Home Office proposals to introduce curfew powers which would give the Police the ability to arrest people for simply being in public places.

In fairness, the Government is currently pressing ahead with the Protection of Freedoms Bill, and many of the proposals are welcome. It was introduced to the House of Lords on October 12th, with the date of the next stage to be announced shortly.

However, the Coalition has wrongly characterised the Bill as a necessary response to Labour’s so called ‘attack on civil liberties’ – in reality, the burden of responsibility should be shared widely.

For instance, as home secretary, Michael (now Lord) Howard, introduced the 1994 Criminal Justice and Public Order Act, which contained a number of illiberal policies. In particular, the changing the meaning of the ‘right to remain silent’; extending police powers to shut down ‘raves’; and increasing stop and search powers, which over the years have been found to have been used disproportionately on young people from ethnic minorities.

Furthermore Labour introduced the Human Rights Act, which is a genuine charter for promoting human rights and civil liberties. Those in favour of abandoning this are the real opponents of freedom.

However, perceptions persist and therefore in the long run it would be damaging for Labour to be viewed as a party not concerned with people’s liberty.

To address this, firstly Labour should reassert the economic freedom for all is not possible without greater equality. Options to do so could include looking at mechanisms to drive through greater parity between workers salaries, and re-emphasizing support for shared maternity-paternity leave for parents.

However, Labour must also develop their approach towards individual freedom – and the Protection of Freedoms Bill presents an opportunity to do so. By tabling amendments to enhance liberty – on restricting kettling, but perhaps looking widely at issues such as the voting age, assisted suicide and drug laws – they can reclaim the agenda from the Coalition.

• Labour needs to take a look in the mirror on civil liberties – Mike Harris, January 7th 2011

19 Responses to “Labour must become the party of freedom”