We reveal the aviation industry’s attempt to imply new transport secretary Justine Greening is “compromised” because of her opposition to a third runway at Heathrow. 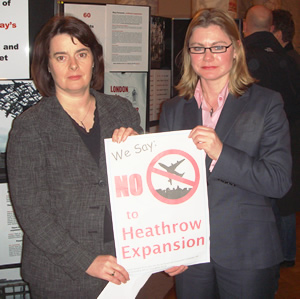 The aviation industry is furious over the appointment of Justine Greening as the new transport secretary; within hours of the announcement, its PR machine swung into action, writes John Stewart of AirportWatch

British Airways boss Willie Walsh was quoted in the Telegraph saying she was “compromised” over Heathrow expansion. Today’s Financial Times (£) carries the same story. And her appointment seems to have prompted a major article in today’s Times (£) by its economic editor David Wighton, ‘Can growth take off without a third runway?’

In the article Wighton writes (£):

“Ms Greening impressed many in the transport world as a junior Treasury minister… From the aviation industry’s point of view there is just one small snag.

“Ms Greening is the MP for Putney, which sits under the flight path to Heathrow, and has been one of the most prominent opponents of expansion at the airport.”

The industry is making a lot of Justine Greening’s perceived conflict of interest of representing a constituency under the flight path. But this is a cover for the fact it has a transport secretary who doesn’t share their view on a key aspect of aviation policy.

As Zac Goldsmith, the Conservative MP for the neighbouring West London constituency of Richmond, tweeted:

“BA boss says Transport Sec is ‘compromised’ re Heathrow. That’s what not agreeing with BA is called? telegraph.co.uk/finance/newsby…”

Philip Hammond, Greening’s predecessor, also represented a constituency heavily overflown by Heathrow aircraft – but there was no mention from the aviation industry he might have a conflict of interest.

There is a real irony in Justine Greening overseeing the Department for Transport (DfT). During the campaign against the third runway, she battled for years through repeated Freedom of Information requests to obtain minutes of meetings that took place between DfT civil servants and the aviation industry. When they were eventually released they showed unacceptable levels of what the Sunday Times (£) called “collusion” between the Department and BAA, in particular.

No wonder the aviation industry is dismayed by her appointment. She knows where the bodies are buried.

Her appointment, though, is a clear signal by David Cameron that, for all the pressure the industry is putting on, the expansion of Heathrow remains off the agenda.

“There are now increasing grounds to believe that the economic case for a third runway is flawed.”

Greening will share that view. In other words, her opposition to Heathrow expansion arises not just from the constituency she represents, but from her belief, as somebody with an economic training, that the business case does not stack up.

This is not to say the new minister is opposed to the growth of aviation. She is not. She will not, though, reverse government policy of no new runways in the south east. And, certainly for the time being, ‘Boris Island’ will also remain off the agenda. But she is a minister who understands the wiles of the aviation industry from her time in opposition and who rejects its claim a third runway is essential for the health of UK plc.

That’s why the industry is using every means it can to question her independence, bandying around words like ‘compromised’. Expect the blitz to continue for some time yet.

• A green approach to aviation is ready for take-off – John Stewart, April 1st 2011