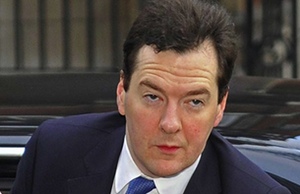 We’re in a unique political economy, one in which there is no market discipline on the government pursuing the wrong economic policy. The sight of George Osborne starting his speech with the FTSE down 1.8% best illustrates the economists’ problem: stocks had their worst quarter since 2002, but the government keeps to its path.

Last year, Osborne’s broad tent coalition in favour of the cuts were:

“the IMF, the OECD, the credit rating agencies, the bond markets, the European Commission, the Confederation of British Industry, the Institute of Directors, the British Chambers of Commerce, the Governor of the Bank of England, most of British business, two of our great historic political parties, one of the Miliband brothers, Tony Blair, and the British people.”

This year, their absence hasn’t changed his policies. The economic problem is that in this sort of situation, there is no market discipline that will.

We often rely in economics on market discipline to force politicians to change economically wrong policies.  In the ERM at the wrong price, then you will be forced out. Too-high government spending crowding out private investment, then the bond vigilantes will have their day.  But in an economy with no growth and no investment, if cutting spending is the wrong thing to do, there is no market discipline to stop that policy.

George Osborne has been very successful at pointing to the “precious low interest rates” as the best market signal of the economic confidence his policies have created.  It’s something that the majority of the UK press continues to emphasise:  the Economist celebrated the same point at the weekend, the UK’s ten year government bond yields have dropped “closer to the comparable rate in thrifty Germany than most euro-zone countries, including France.”

Fears of exposure to France drove Morgan Stanley’s share price down 10% on Friday. France has a net debt of 80% of GDP, whereas UK has a net debt of 60%. It’s specious.  German Bond yields in 10yrs are at 1.88%, the UK’s is at 2.37% and France’s is at 2.56%.  Versus the sturdy UK, the profligate French (with their collapsing banks) are being charge a whopping two-tenths of a percent more.

The low bond yields are signalling a serious growth scare, not confidence in the deficit. Osborne said last year that “if we don’t get a grip on government spending, there will be no growth.” This year he still maintains that in a debt crisis low interest rates are the “most powerful stimulus that exists”.  But last year growth was very fast, now bond yields are lower together with lower growth and investment.  The two are related.

In this situation, the economist can only defer to politics, that the terrible lived experience of a debt deflation will change the government from a Hoover to a Roosevelt.  Sorry.

15 Responses to “Just who WILL Osborne listen to?”