It is historic news that ETA may at last be about to embark on a serious peace process; it could yet also have a major impact on the imminent general election. 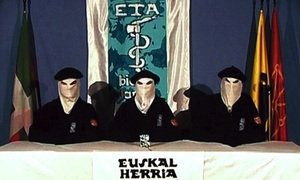 Rob Marchant is a management and communications consultant, blogger and eco-entrepreneur; he previously worked as a Labour party senior manager through the 2001 and 2005 general elections. Rob blogs at The Centre Left

In recent days, rather extraordinary news has been breaking about the last remaining home-grown terrorist group in Europe.

Yesterday a conference in San Sebastian, involving no lesser figures than Kofi Annan, Bertie Ahern and Gerry Adams, reached out to ETA and it is strongly felt that a positive response is likely. Other notable figures such as Tony Blair have been involved with the consultations.

However, although it may seem strange, no national Spanish politicians attended, for reasons we shall now explore.

This begs a few important questions:

Why is it happening now? It seems to have resulted from two things: a growing popular movement for peace (the conference was organised by the “social collective” Lokarri) and positive indications on the part of ETA itself.

While ETA has clearly been in slow decline ever since the “decapitation” of its leadership in 1992, it is difficult to escape the conclusion that the timing has everything to do with the impending general election on November 20th, which the conservative PP seem very likely to win: a recent poll gave them a whopping 18 per cent lead over the socialist PSOE. While both parties refused to attend the meeting, they have different reasons.

The PSOE got its fingers burned in 2006: prime minister Zapatero agreed for contacts to be made, then was made to look foolish and naïve when the ceasefire collapsed. The PP, on the other hand, has historically been strongly against any kind of contact with ETA and pursued a very hard-line policy when in power under the Aznar administration.

It has also, on occasion, played populist politics with the issue by siding with terrorist victims’ organisations, who have a powerful voice and who have also taken a hard-line position.

For this reason, when ETA announced a further ceasefire in January, both main parties treated it with scepticism, and neither now want to take a big risk in the middle of an election campaign. That does not mean they do not see possibilities. However, ETA know very well that if the PP win, this may all become very difficult unless an unstoppable momentum is built up beforehand.

Are they serious? It seems so. They actually announced the ceasefire in January this year: problem was, they had cried wolf in 2006 and no-one believed them.

Having thus squandered nearly eight years of Socialist government, an environment which obviously made for a better chance of peace, ETA must also, if they have any seriousness at all about disarmament, realise that the involvement of these international figures, as well as the timing, gives them the best possible chance they are likely to get to negotiate for at least another four, or even eight, years. That said, others are accusing ETA and the organisers of “theatricising” the process.

So what’s the reaction so far?

According to El Pais, the PP leader and likely next prime minister, Mariano Rajoy, has been dismissive in public, while instructing his political lieutenants to play the subject down while he formulates his own strategy, so as not to convert it into a major campaign issue.

In fact, he “just happened” to visit the Basque country yesterday himself to meet business leaders, deliberately giving the impression of nonchalance about the peace conference nearby. But, privately, he knows ETA is on the way out – it’s just a question of when. And they are banking on the fact that the Socialists won’t have time to make political capital out of it before the election.

As for the Socialists, their prime ministerial candidate, Rubalcaba, has been quiet and cautious: he does not want to rock the election boat, for now at least. Others have been more forthright: the Basque Socialist regional president, Patxi López, called it “magnificent news”.

And the still-influential Spanish ex-president, Felipe Gonzalez, criticised the PP for their public dismissal of the conference: “every time we approach the end of ETA, there are certain people who try and distance themselves from it, and deny that it’s true”.

And the impact on national politics? Conceivably, it could be big, but the real answer is “it depends”. The question is this: in an election where Rubalcaba is in serious danger of being crushed, will he risk diverting his campaign and aligning himself more strongly with the peace process, in order that he can both help support it – being in the party of government – and, of no little importance, win support for his own re-election so he can see it through?

One could argue that he hasn’t much to lose but, whatever happens, he must tread carefully and look like a prime-minister-in-waiting putting the country’s interest first, not a desperate politician clutching at straws. And, of course, there’s always the possibility that it’s yet another false start.

On the other hand, if this were to become the defining issue of the campaign, and the PP were to come down on the wrong side of it, it is conceivable that the PP could yet snatch defeat from the jaws of victory, just as their fatal misjudgement in wrongly attributing the Madrid bombing to ETA (in the face of clear evidence to the contrary) cost them the 2004 election.

Although perhaps still highly unlikely, it would be an extraordinary irony for a party to lose two out of three elections for the same reason: ETA. But such is the persistent influence of the conflict in this little region on Spanish politics.

Two things, though, are pretty much certain: first, that ETA is weak and, sooner or later, will disarm; and second, that this rather lacklustre and predictable general election campaign just got interesting.

• Scottish independence: time for a homage to Catalonia? – Rob Marchant, May 14th 2011

• What would happen if Spain follows Ireland over the edge? – Rob Marchant, November 25th 2010

6 Responses to “Is the ETA disarmament really the beginning of the end?”