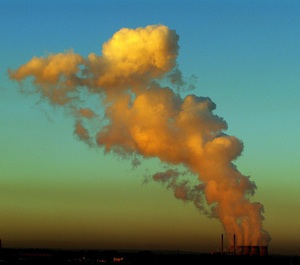 Andrew Pendleton is the associate director (climate change, energy and transport) at the Institute for Public Policy Research (IPPR)

Cats notwithstanding, by far the most short-sighted contribution to this entire conference season was George Osborne’s statement that we no longer aspire to be a leader on climate change. It is, as Tim Vine says about crime in multi-storey car parks, wrong on so many levels.

In case we’ve forgotten, ground zero is the climate itself.

If ever there was an issue that required the kind of leadership David Cameron called for in his subsequent speech, it’s climate change, because now that the furore created by Lord Stern in 2006, the IPCC in 2007 and the Copenhagen summit in 2009 has died away, we need leaders who are prepared to rise above the braying tribal minority in political parties and stand the ground we’ve made up.

The next IPCC report is currently doing the rounds in draft form and it makes grim reading, with observed sea level rise and polar ice loss running at or ahead of predictions made by the climate models. We’re in very deep shit and we need leaders that are prepared to help us get out of it by leading rather than following.

Level one is the way people see this issue. While interest in climate change has undeniably waned since around 2007, people are no less concerned with polls suggesting that more than three-quarters of the UK public remaining convinced that humans are either partly or mostly responsible for climate change. The problem is that they are more concerned about the economy.

In recent IPPR consumer focus groups examining the key issue of the rising costs of energy and the affordability of household heating – which is also a critical poverty and health issue – people in a variety of different homes and locations told us that they thought it was important to spend some money on new forms of energy, but that they would like to know what they are paying and on what it is spent.

This isn’t only a communications issue. It does mean that policies such as the recent carbon floor price need rethinking as it will be tough to explain to households who foot the bill that it won’t reduce any carbon, probably will disadvantage UK businesses and most likely won’t make any significant difference to the levels of clean energy investment in the UK.

But this is a particularly keen issue for Mr Osborne because while the concept of having a more certain price for carbon is a good one, the clunkingly crap nature of the design of the UK’s scheme is of the Treasury’s making. It is a stealth tax.

Moving up to level two, at a time when jobs and growth are central to pretty much every speech made by any politician anywhere, not leading would seem to suggest not capitalising on the very significant opportunities that lie in low-carbon innovation.

Of course this will not appeal to the rabid right in the Chancellor’s party, but to anyone else who thinks that innovating is the key to achieving growth, generating jobs and increasing UK prosperity not leading in the development of lithium-ion battery technology, not leading in offshore wind power engineering and not leading the home energy efficiency revolution may seem madder than an asylum seeker’s cat. If we do not lead, others will. For instance, the US and Germany will be only too happy to patent the next generation of battery technology if we don’t.

Mr Osborne and his spin doctors might well say none of the above requires the kind of climate targets we currently have. The trouble is that the sunny uplands of levels three, four and five will only be reached if we set all of our activity on low carbon into a framework.

Manufacturers such as Nissan and Toyota have chosen the UK as a manufacturing base for hybrid and electric vehicles for two reasons. One is because the government paid incentives to encourage them to come here rather than France or Spain, the other is because they know there will be a market to sell to precisely because we have clear, distinct and long-term targets. The Chancellor and his advisers should go to the people of Sunderland or Burnaston why we don’t want to lead the world on this agenda any more.

By leading in the creation of a low-carbon economy, the UK stands to benefit hugely. We may have got the focus wrong in some areas – certainly too much policy cost has been piled up on the shoulders of energy bill-payers – and in many respects (such as actually cutting emissions) we may not be leaders anyway. But the overall goals are right and the aspiring heart of our approach is absolutely critical.

If George Osborne really thinks climate change doesn’t matter, that voters don’t care and that there isn’t business to be made in new technology then he should say so; otherwise, can we just assume his speech was part of the silly politics of the conference season and get on with leading and proving that we can lead.

• Will Osborne sell out “greenest government ever” in Budget? – Dominic Browne, March 21st 2011

• After Copenhagen, we need to change the climate argument – Andrew Pendleton, December 22nd 2009

25 Responses to “If Osborne gives up the lead on climate change, he can kiss goodbye to a recovery”