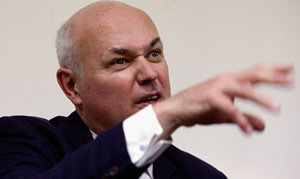 Iain Duncan Smith confirmed today that the government will “recognise” marriage in the tax system, reversing what he calls the “damaging financial discouragement to couple formation”. In reality, however, as has long been reported on Left Foot Forward, the plans are the very worst kind of social engineering that will not benefit nearly as many families as IDS claims.

Earlier this year, Demos said it was:

“… a distraction from the real challenge, which should be to ensure that children grow up in stable and nurturing environments that support their social and emotional development…

“There is no evidence of a ‘marriage effect’; rather marriage is probably a proxy for more successful relationship. Government is right to support a proxy for more successful relationships in so far as they impact on children. However, many married couples do not have children, making this proposal both moralising and inefficient, as it draws resource away from some of the most at risk families.”

“All the evidence suggests that it’s not marriage that matters, but the quality of parental relationships – this IFS study, for example, found that young children’s cognitive and emotional development is not significantly affected by the marital status of their parents…

“There’s good evidence that financial incentives have little impact on whether people decide to stay together or not. But if, as it seems, Mr Cameron believes that a £3 a week tax break will influence people’s decisions about their relationships, it is clear that he will need to think again about the proposed family benefit cap which will provide a much larger incentive to split up.”

Many on the right are also wise to the stupidity; Nick Clegg has described it as “patronising drivel”, and Ken Clarke has called it social engineering imported from the Tea Party “religious right”, while Dr Patrick Nolan of Reform wrote on Conservative Home last year:

“This claim that the UK largely stands alone among industrialised countries in not recognising marriage is quite simply wrong. There are a host of other countries that make no recognition of marriage in their tax systems at all, including New Zealand, Sweden, Finland, Greece and Hungary.”

“As a number of commentators have pointed out, it is not possible to conclude from the statistics that marriage itself causes the positive outcomes associated with it and that therefore the stability of a society is a function of the support given to the institution of marriage.”

On the impact of the policies, the IFS revealed last year that the policy will not impact child development, published research showing that:

“Encouraging parents to marry [is] unlikely to lead to significant improvements in young children’s outcomes… Our work shows that, even if more couples did decide to get married in response to the small monetary incentive, such a policy would have a limited effect on young children’s development.”

As few as one in 20 couples may benefit; as Left Foot Forward reported last January:

“Treasury analysis of this proposal shows it would benefit 6 per cent of married couples, 2 per cent of all family units (single people or couples and  their dependents) and 3 per cent of adults.”

The policy discriminates against lone parents and widows, excludes 11.6 million married people where both husband and wife work, and does nothing for the roughly 600,000 married couples of working age who do not earn over the £6,555 tax threshold.

Above are merely the stats and analysis, the dodgy financial justification and outcome benefits of the policies exposed. The real horror lies in the judgemental nature of the policy, the patronising, sheer nastiness of a Tory government looking down their noses at certain types of family, saying they’re worth less to society than others, and what’s worse is the spectacle of Liberal Democrats, Liberal Democrats, collaborating with this dogmatic, vicious right wing ideology.