This afternoon, peers will vote on amendments to the health and social care bill - a bill that threatens to destroy our NHS as we know it, reports Shamik Das. 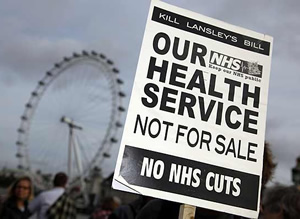 This afternoon, peers will vote on amendments to the health and social care bill – a bill that threatens to destroy our NHS as we know it. The bill is currently at the second reading stage in the House of Lords, which debated the bill long into the night and will resume debate this morning at 11.

At about 1:45 today, members will vote on Labour peer Lord Rea’s motion:

“This House declines to give the bill a second reading, in the light of the statement in the Coalition Agreement that ‘we will stop the top-down reorganisations of the NHS that have got in the way of patient care’.”

If this vote is successful, the bill would go no further in the House of Lords and could not pass into law in this session of Parliament.

If unsuccessful, as seems likely, peers will then vote on former Labour health minister Lord Owen’s amendment, at approximately 2:30, which states:

“A Select Committee shall be appointed to examine and make recommendations to the House on the issues raised by the 18th Report of the Constitution Committee, namely the Government’s and Parliament’s constitutional responsibilities with regard to the NHS, in particular to clarify (a) the extent to which the Secretary of State remains responsible and accountable for the comprehensive health service, and (b) individual Ministerial responsibility to Parliament, and to report on the extent to which legal accountability to the courts is fragmented…

“This House requests that the services of Parliamentary Counsel be available to the Committee; and that the Committee shall report no later than 19 December 2011.”

Were this amendement – which refers the entire bill to a select committee for what would be a line-by-line deconstruction – to pass, it would effectively kill the bill, something the Secretary of State conceded late last night; any changes would have to be reconciled with the version the Commons passed, which the Tories just would not accept.

Here are Left Foot Forward’s ten reasons why peers should vote with the consciences, vote for the amendmemts, and vote to save our NHS:

1). It leads to a conflict of interest for GPs, incentivsing them to not NHS-commission services they can provide privately;

3). There will be more bureaucracy;

4). You should not reform during austerity;

6). It is expensive to carry out the reform;

7). It will remove the Secretary of State’s responsibility to provide;

8). GPs should be doctors not entrepeneurs – a crucial part of what Lord Owen called yesterday ‘the pool of altrusim’ in the NHS;

9). This will kill collaboration; and

10). There is no mandate – from either coalition party, from either party manifesto, or, as Lord Rea says, from the coalition agreement.

As this morning’s Guardian puts it:

In two crunch votes in the Lords on Wednesday, Liberal Democrat peers in particular must decide whether loyalty to their leader requires acquiescence in a botched law which he says was the best deal he could get…

As health budgets are squeezed, it will be more important than ever to have clarity on the underlying principles, such as where the buck stops. The coalition might have hoped to evade blame for problems that arise from the financial climate, but after the ruinous row over these reforms, every dropped bedpan will inevitably reverberate back to Whitehall – whether that is desirable or not.

The descendants of a liberal party which helped to found the NHS now must decide whether they are prepared to risk a row to defend it. Capitulation here could carry a higher price than raising student fees.

The stakes really are that high.

Liberal Democrat peers must join their Labour and crossbench colleagues, do the right thing, stand up for the voiceless, the poor and the unwell, stand up to Nick Clegg and the Conservatives, say no to the reforms and vote, vote, vote to save the NHS.