Jos Bell gives an account of the key House Lords debate this week on the health and social care bill. 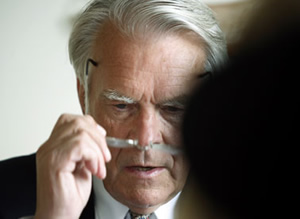 NHS campaigner Jos Bell presents an eyewitness sketch of the House of Lords debate on the health and social care bill, which took place this week

If it were not so ironic it could be reassuring: during the course of the House of Lords second reading of the health and social care bill almost every Lord or Baroness who spoke referred to the need to amend the bill in one way or another.

That included the government lead, Earl Howe (Conservative), who, with Glenys Thornton (Labour) for the opposition, sat through 17 hours of debate over Tuesday and Wednesday, along with the added wild card of the redoubtable Lord Owen (Crossbench), the former Labour health minister finding himself dragged back into the health arena from his usual foreign affairs dealings by his own genuine alarm about Tory health secretary Andrew Lansley’s stated aim to dismantle the NHS.

To say the proceedings had edge would be the parliamentary understatement of the decade.

The throne glinted in the candlelight and the watching cobwebs hung from the towering gothic rafters. On the following morning the bishops would be out in force in their flowing robes. History in action.

Twelve hours into the debate and Baroness Angela Smith (Labour) softly and clearly read out the damning list: just in the past week, 400 practicing medical professionals had written a letter of protest to The Times, 60 more, including the general secretary of the RCM, to The Independent; 100,000 people had signed a 38 Degrees petition in support of Lord Owen’s amendments in the past day (which visibly perked up His Lordship and raised a sotto voce late night cheer)… And so the list went on.

As Baroness Scotland (Labour) said in her graceful speech on the following morning, this was a debate for the whole country – she even spoke of ‘feeling the love’ for the NHS. Lords whose speeches will now forever be engraved in history stood to speak with passion, concern and learning.

Ninety-year-old Lord Walton (Crossbench), with decades of NHS upheavals as a point of reference, offered a show stopping speech. He had earlier told me he had received around 3oo letters and emails with not a single one in favour of the bill.

“What if a CCG fails?… What if the GPs are not up to it?… Also, what if they insist on managing treatment within practice to detriment of patients?”

The Haxby HGB example was repeatedly flagged up as a telling tale of GPs bringing in fees for small procedures which allegedly “fell outside the NHS”.

Time and time again, speakers reiterated it was the wrong bill at the wrong time, with £20 billion savings targets; that such a massive upheaval, ‘galloping in the external market’, was not needed and would cause irreparable damage; and that there is pressing need to build upon current expertise rather than risk losing it, a fact even spoken of by some Tories.

Predictably, the lack of mandate and Lansley “shrinking his role when expanding the role of the market” was flagged up ad infinitum – to which the alarmed Earl Freddie Howe (Conservative) surreally revolved the post-election ‘consultation period’ backwards into a subliminal pre-election alert. One noble Lord’s observation the government is “losing the plot” seemed to be entirely in order.

The designated role of Monitor being an overall threat to the NHS due to a lack of accountability and lack of transparency was spoken of best by Baroness Helena Kennedy (Labour) – it is entirely crucial. Entrepreneurial Lord Whitty (Labour) economically perceived the “rationale re: cost saving is no longer clear”, and equally crucially that it was quite “unclear what anti-competitive behaviour would be”.

From Baroness Barker (Liberal Democrat), oh yes, “accountability is of great concern – also upholding standards”. However, she then told Lord Owen (almost wringing her hands with the effort) that no, she would not be supporting his proposal. His Lordship glowered from his cross bench and she sat to fold her arms in defensive fashion, clearly desperate for the overnight moment when Paddy Pants would come and rescue her from serial bombardment on the morrow.

There was much concern about the lack of independence of HealthWatch – and insufficient attention to its advocacy role:

“…which is so much more than outlined in the Bill.”

Lord Victor Adebowale (Crossbench) asked if health inequality would improve as a result; his next point more than inferred an answer in the negative when he voiced great concerns for the needs of those with complex and multiple conditions which ‘the tarriff’ avoids at these patients’ peril. Treatments and care packages “that don’t happen due to those that are left out” – the bill does not show it and it must!

The threat to childrens’ services and the loss of all the gains under “every child matters”, including much concern regarding lack of provision for cared-for children, speech and language specialists, and provision for autism.

“The voice of the child must be heard.”

The danger of unregistered carers was a running theme, and Baroness Joan Bakewell (Labour) spoke eloquently about the threat to the care of the elderly – reiterated by others who have concerns about the relationship with local authorities and funding issues, plus a need for more details regarding community care development – although Tory Lord Lucas wanted more details on how people “would look after their own”. Touché!

We were told the treatment of armed forces personnel needs more attention, a point missed by Lord Ashdown (Liberal Democrat), who was notably absent throughout all but the final minutes, to act as nemesis to his old sparring partner from the days of the gang of four.

Many cited the urgent need to safeguard our long tradition of medical training and research, while Lord MacKenzie (Labour) asked for more emphasis on developing clinical leadership in hospitals.

Personal stories were used to illustrate both the value of and threat to our NHS.

Hereditary peers who tend to fall below our collective radar popped up – Earl Clancarty (Crossbench) spoke movingly of his daughter’s care and then the Earl Listowel (Crossbench) said:

“We need to show staff support, for they cannot show support and kindness unless they experience it themself.”

Baroness Royall (Labour) spoke bravely of her personal experience with her late husband’s cancer care, fearing for the future of other patients; Lord Bill Morris (Labour), in what almost felt like a eulogy, spoke wistfully of a service publicly owned and publicly funded; Lord Crisp (Crossbench) then lamented the:

“…wasted opportunity; instead it will be all about commercial contracts, not about securing quality cost.”

Lord Collins (Labour) stood at 12:20 am to explore the threat to public health provision and co-ordination. The loss of expertise and safeguards for HIV specialists and the threat to established integrated care for chronic conditions – a view shared by Diabetes UK. Let us not forget that in the background there were myriad patients’ groups hanging onto every word.

Sadly, we now know the result. Liberal Democrats who chose to ignore the wise words of Shirley slithered their way into the discontents and she seemingly didn’t vote at all. Those Tories who regretted the bill had tended to rationalise their support for it by expressing the view that matters had gone too far to change direction. More evidence, if any were needed, that “this House has been taken for granted”, as Lord Monks had admonished.

The rueful walk of Lord Winston (Labour) towards the tellers’ bench and the rows of empty opposition seats told us all we needed to know.

It’s worth mentioning here how many have links to private health.

Mr Lansley’s aim to ‘do it quick’ has gathered the pace and dragged the legislation behind it, after months of epic campaigning and an increasing clamour of professional and patient voices – to the point where it would seem only a very small percentage of the population have any faith at all in the contorted and contrived bill. The hour came when the chance of rescuing the NHS from the brink of extinction had gone.

As one shadow front bench member afterwards told me, from now on it will be ‘trench warfare’. All we can now hope for is the sensible addition of amendments which will safeguard as much of the service as possible, but with such a short time to consider all of these points (yet another paltry 10-day allocation) this will need to be an all guns blazing approach indeed.

“How does the high sounding rhetoric match up to the reality?”

Here’s the thing – one of the saddest results of this week of anti-history, where so much of what we have learned has been thrown away onto a Lansley pyre, is the palpable sense our Parliament has become considerably more removed from the people it was meant to serve. We cried out to you so very loudly, my Lords; why did not more of you listen?

That is the reality.

38 Responses to “Losing the plot: How the Lords rubbished the NHS bill – then voted for it anyway”