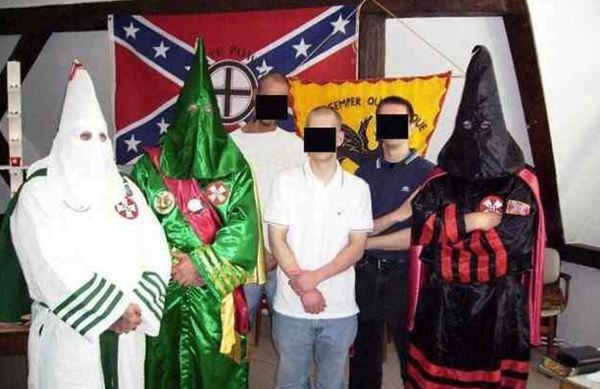 The Daily Mirror is leading today with its exposure of the leader of the British wing of the KKK. It identified Chris Hopgood, the “grand dragon” of the British KKK by his distinctive hand tattoos.

He is pictured below, in the white robes, posing alongside another grand dragon, an imperial wizard, and other members of the “European White Knights of the Burning Cross”.

The group claims it is officially recognised by the original KKK in the US and is partnered with several other US groups – including the gay and black-hating Keltin Klan Kirk, whose masked leader is on YouTube preaching hatred in front of a swastika with an assault rifle.

Butch-looking Hopgood ran a separate whiteknights-kkk.co.uk website, which was recently taken down, on which he denounced homosexuality as a “cancer that threatens our way of life”, and warned: “We are a threat for we will never lay down to the oppressors and enemies of our white race.”

Yesterday the Mirror paid Hopgood a visit but was told he was not home. Five minutes after we left, Hopgood called our reporter claiming he was not a member of the Ku Klux Klan.

When asked why he was dressed in a hood and the full Klan uniform, appearing in photos alongside KKK leaders from Europe, he claimed: “I do it for my personal jollies.”

Hopgood added: “I have no views on the KKK. The fact that I have my political views is known by 99.9% of my customers.

“One of the royals dressed as a Nazi stormtrooper, but that does not make him a Nazi. I am not a member of the Ku Klux Klan and I am not recruiting in England, Scotland or Wales.”

A spokesman for anti-extremist organization Hope Not Hate said he was shocked the KKK had a presence in the UK.

He declared: “It’s chilling to see the KKK bringing their message of hate to the heart of England.

“It shows how far the tentacles of international extremism have spread. This is why we must all remain vigilant to prevent racists getting a stranglehold on our ­communities.”

Whether this represents a new rise of the Klan in Europe, or one racist biker making some friends on the continent, is not currently clear. Either way, though, Nick Griffin is likely to be pleased. The BNP leader, who flew to the States last year to address a white supremacist conference, and defended the Klan on Question Time the year before, is currently suffering from a paucity of friends, even by his standards.

He was confronted by BBC last week over fraud and financial mismanagement in the BNP, following up on reports in March last year on the BNP European Parliament expenses swindle – in which Griffin and Andrew Brons failed to fully disclose their £500,000 expenses – while last January, we revealed the BNP were under investigation by the commission, for failing to give a “true and fair” view of their financial circumstances.

But Hopgood, at least, remains a friend of Griffin and the party:

“The BNP is a legally elected political party elected by the people of England and as such he has the rights of any other legal party to have his say on our behalf.”

To borrow a line, if Hopgood and Griffin want to live in a white nation, maybe they should move to the north pole together, and leave the rest of us alone.

14 Responses to “Griffin’s friends the KKK come to Britain”