The coalition has put all its chips on chancellor George Osborne getting it right on the economy, reports Left Foot Forward’s Ben Fox. 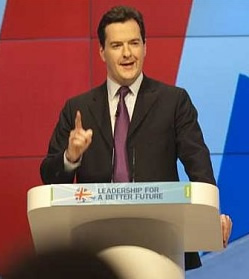 George Osborne’s speech yesterday was short in length and on content. The message he was aiming for was reminiscent of war-time propaganda: “Keep calm and carry on”. It seemed most of it was about what he wouldn’t do – there will be no tax cuts to please the Tory blue-rinse brigade and no extra spending to promote growth. But it was a deeply political speech from the Tories’ answer to Gordon Brown.

Osborne took on his own party as much as Labour. He will have upset his party’s ‘flat earthers’ no end by describing climate change as “a man made disaster” and emphasising the importance of the Green Investment Bank.

His refusal to countenance tax cuts won’t go down well with middle-England either. However, there was still plenty of populism in his speech.

Osborne devoted several minutes to efforts by the coalition to tackle tax evasion by the rich and his recently agreed tax treaty with Switzerland. Given the Tory party is funded by non-doms and tax exiles (Michael Ashcroft, anyone?), it’s a bit rich for the vhancellor to tell his party he is:

“…just as tough on tax evasion as benefit fraud.”

What is new (although details are very thin) is what Osborne somewhat vaguely described as ‘credit easing’ that will be “similar to the National Loan Guarantee Scheme we talked about in opposition”.

The chancellor was not talking about another round of quantitative easing by the Bank of England but of a credit scheme where the Treasury will buy the corporate bonds of small companies to provide money to firms that can’t borrow from banks.

It sounds like a smart idea – small businesses are the most important drivers of the UK economy. But Osborne’s ‘credit easing’ is an admission the coalition’s much vaunted ‘Project Merlin’ is failing. Because they have failed to get the banks lending, the Treasury is now being forced to cut out the middle-man by providing the cash themselves.

Just as interesting was the way Osborne marked himself out as a very un-Tory, even an interventionist, chancellor. He described the ‘credit easing’ as “another form of monetary activism” and later went on to say “I will intervene when the market doesn’t work, and set it free when it does” – words that could have been uttered a few years ago by a certain G Brown.

But while there wasn’t much in the chancellor’s speech, Labour should be wary of the tone he struck and Osborne’s political message. Osborne devoted the first half of his speech to the debt crisis which, he claimed, was the fault of Labour, the banks, and the eurozone. The fact British banks have contributed to the eurozone debt crisis and are extremely vulnerable to sovereign default was conveniently ignored.

He was applauded for saying the UK would stay out of the eurozone rescue fund, but did not mention that the bail-out fund is protecting our banks.

Osborne the ‘Iron chancellor’ is more of a political tactician than an economist and his barbs to Labour about burying New Labour and to his own party on tax cuts were about marking out his territory for the next election – but Paddy Ashdown struck an appropriate note:

“Everything now rests on Osborne’s judgment.”

The coalition has put all its chips on the chancellor getting it right on the economy. With stagnant growth, missed debt and deficit targets, and falling living standards, it’s a hell of a gamble.

9 Responses to “No growth? ‘Keep calm and carry on’ says Osborne”