Ninety eight of the FTSE 100 companies are using tax havens, where you’ll find a whopping 38% of all of their overseas companies located, Left Foot Forward can reveal. 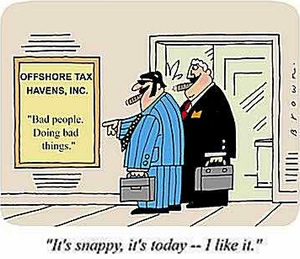 It is well known multinational companies use tax havens to dodge their bills. Last year ActionAid exposed how Grolsch owner SABMiller siphoned an estimated £100 million out of Africa, while Boots, Barclays and Topshop, to name just a few, have all been in the frame in the UK.

But for the first time, as Chart 1 shows, we’re able to show the massive extent of tax haven use throughout the FTSE 100.

Ninety eight are using tax havens, where you’ll find a whopping 38% of all of their overseas companies located.

Our high street banks are the heaviest users with 1,649 tax haven companies shared between Barclays, HSBC, RBS and Lloyds. Barclays has 174 companies registered in the Cayman Islands alone.

Why on earth do multinationals chose to locate so many companies in tax havens? Britain’s biggest companies have some serious questions to answer.

Developing countries lose three times more to tax havens than they receive in aid each year. This prevents them from building up their own revenue base and keeps them more dependent on international aid. The same problem hits the UK exchequer too, with estimated losses as high as £18 billion a year.

“Much of the shadow banking sector, a major contributor to the economic crisis, was only possible because of tax haven secrecy.”

“We will also target tax evasion and off-shore tax havens… Everyone must pay their fair share.”

…politicians from the UK and around the world have talked tough on the need for a crack-down – but ActionAid’s research show UK multinationals continue to do brisk business in tax havens.

Our findings are of particular concern because many of the FTSE 100 groups are set to benefit from Treasury plans to give multinationals using tax havens an £840 million tax break, by relaxing the very rules designed to prevent abuse.

These same rule changes would also give the green light for UK companies, operating in the developing world, to siphon even more of their profits out of poor countries and into tax havens.

ActionAid is part of a global campaign, pushing to end tax haven secrecy at the G20 summit in France this autumn.

• Hypocrite Murdoch tells us how to vote yet avoids billions in tax – Claire French, July 11th 2011

49 Responses to “Exclusive: 98 of the FTSE 100 companies are addicted to tax havens”