Barbara Bates talks about her fears over pensions, explaining how David Cameron, once again, just doesn’t get it. 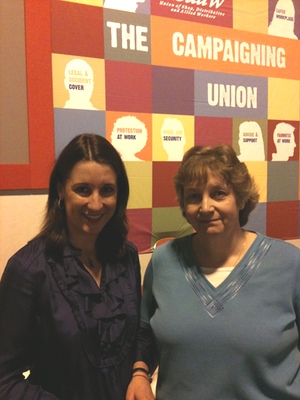 It has been almost one year since I learnt about government plans to accelerate the increase in the state pension age. Now there’s just two weeks before these changes become law. I had already adapted to the equalisation of women’s state pension age with men’s, announced in 1995, and prepared to retire later.

But when I heard the news of the government’s newest ideas I was shell-shocked. The goalposts were moving again, and this time with just a few years to prepare.

For me, it means an extra 23 months at work. I have osteo-arthiritis and am worried about being able to carry on for that extra time working in a manual job. I have worked hard since I was 15, and contributed – either working or caring – throughout my life. The thought that I might not be able to carry on is really worrying for me.

That’s why I launched a petition about the changes. With backing from Unions Together, my trade union, USDAW and Rachel Reeves MP, I spread the word, and have been overwhelmed by the response. I delivered 10,000 names to Number 10 Downing Street, and the petition has since got longer and longer.

Over that time I’ve spoken to lots of women about it – when I came to Parliament for Age UK’s lobby, and through our online campaign. Like me, none of the women affected want hand outs, they want fairness and honesty. And I don’t think we’re getting either at the minute.

I’ve never had enough information or earned enough money to be able to save into a pension scheme. I’ve taken breaks from work to care for my husband, and been paid less than men I know. I haven’t got much saved up for my retirement and I know a lot of women are in the same boat.

The government know it is unfair. They promised that it wouldn’t change so quickly in their coalition agreement. Since then I’ve heard Iain Duncan Smith say that they will bring in ‘transitional arrangements’, but I don’t know anyone who knows what they are.

The deadline for this being decided is coming closer all the time, and so is my state pension age – I want an honest answer: what are these transitional arrangements and how will they protect me and women like me?

David Cameron says he is worried about losing women voters. But all the talk in the world won’t do anything to sort out my position. He shouldn’t be making plans which unfairly affect women, but it looks like that is exactly what he is doing.

Labour MPs voted against these changes in the House of Commons and have been excellent at keeping the issue alive in Parliament, we now need the government to listen – and to act.

The hill to retirement is a mountain that seems to get higher all the time – just when we start to see the peak, another one looms behind it. I want the government to be honest about what it is going to do to make sure we can see the full picture. I had hoped that Steve Webb would make the picture clearer at Lib Dem Conference, or that Iain Duncan Smith would tell the Tories what the plans were. But still I have heard nothing.

People who have signed the petition are writing again to their MPs, and to the government, to reverse these unfair changes. You can join them here.