Liam Fox is a threat to David Cameron, vulnerable, damaging to his government and bringing politics into disrepute - but the PM may be too weak to get rid of him. 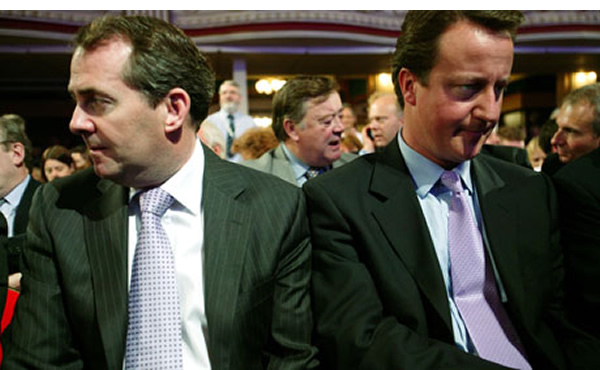 From a prime ministerial point of view, the correct call on the Fox-Werritty scandal seems clear: It’s time to send the defence secretary on his way.

Either wrongdoing has been committed – in this case that an unauthorised personal contact, seemingly through friendship, had a high level of access into Ministry of Defence business, in addition to an expenses scandal – or it looks so bad that the government will continue be seriously damaged by Fox’s presence around the cabinet table.

Even as seriously, Werritty’s career in serial lobbying outfits that were not exactly great money-spinners but appear to have mirrored Fox’s ministerial path raises concerns of  ‘taxis for hire’ political behaviour. However, numerous right-wing commentators have written this morning that Cameron is just too weak to get rid of Fox.

As Paul Goodman puts it on Conservative Home this morning:

“The most pressing reason for Cameron wanting to keep his Defence Secretary aboard is not the desire for a quiet life, but a fear of the future. As we know from the depature of Fox’s heroine, Lady Thatcher, stab-in-the-back myths can have potency and resonance.

“If the prime minister were to lose him quickly, he would not only have yet another senior right-winger loose on the backbenches but risk the emergence of exactly such a story – of a left-of-Tory-centre leader wanting to lose a right-of-Tory-centre rival.”

“The defence secretary was a candidate in a leadership election won by moderate Cameron. He’s a token Thatcherite in a Cabinet of fence-sitters. He’d be sensitive to any interference from No 10.

“As a diehard Atlanticist, Fox also keeps close to the Americans, who might not actually choose our defence secretaries, but know how to get rid of them when required. Cameron wouldn’t want them thinking he was hassling their friend unnecessarily.”

Even Benedict Brogan, the coalition’s emmisary to Fleet Street, alludes to the prime minister’s problem thus:

“He and Dave will never be bosom mates, but Dr Fox serves a useful purpose as one of the few keepers of the Thatcherite flame around the Cabinet table.”

Fox is a threat to Cameron, vulnerable, damaging to his government and bringing politics into disrepute – but the prime minister may just be too weak to get rid of him.

36 Responses to “Weak Cameron will struggle to fire Fox”