With 81 of the 305 Tory MPs voting against their government on the EU referendum vote, it is clear David Cameron cannot control the Eurosceptic Tory backbenches. 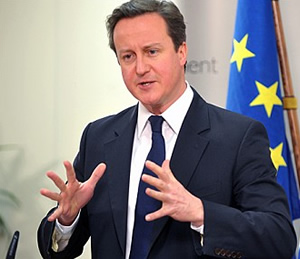 David Cameron may be a Tory prime minister but there is no doubt now he has lost his party. The result of last night’s motion on an EU referendum is largely immaterial – with Labour’s support the government always had the votes.

But with 81 of the 305 Tory MPs voting against their government it is clear the Tory backbenches cannot be controlled.

As Left Foot Forward has mentioned, most of the rebels were elected in 2010. Many of them were rebelling for the first time and several were ministerial PPSs.

The referendum vote has poured salt on the Tories’ existing European wounds and will strain the tensions in the coalition. But at a time when EU leaders are locked in summit negotiations on the future of the euro area, this domestic rebellion is also a national embarrassment to Cameron.

It will particularly concern the likes of German Chancellor Angela Merkel and French President Nicolas Sarkozy who are anxious to start work on treaty changes for the single currency.

Given the high probability negotiations will soon begin on a treaty change for the euro area, has the vote strengthened Cameron’s hand in demanding new opt outs and derogations? Probably not.

In an ideal world, the Tories would use treaty negotiations to get back the opt-out from EU social policy legislation, including directives on maternity and paternity leave, holiday entitlement, agency workers and working time. Leaving aside the fact this would represent an attack on the workplace rights enjoyed by millions of Britons, Cameron is already in a weak position.

President Sarkozy’s anger with Cameron’s self-righteous hectoring at the weekend summit talks reflects French and German resentment that nearly half of the €440 billion European Financial Stability Facility (EFSF) – which has so far stemmed the worst effects of sovereign debt default on the banks – has been guaranteed by Germany and France.

Even though the UK banking sector is also standing on the edge of a precipice the UK has not provided a penny.

If, as expected, only the rules governing the euro area are changed it will be even harder to re-open social and employment policies. The UK and Denmark are the only EU countries which are not bound by their treaty commitments to join the euro and so, while changes to the euro area would indirectly affect them, other EU countries are not likely to allow a complete re-opening of the treaties.

Indeed, if the Coalition was to insist on the re-opening of EU social legislation as its price for allowing fiscal union in the eurozone, they would probably be asked to contribute to the EFSF – which would involve guaranteeing around €80 billion.

Playing the eurosceptic card may have helped win David Cameron the Tory leadership but now his MPs have called his bluff. Education secretary Michael Gove is the latest government minister to tour the studios to tell people how committed the government is to negotiating the UK’s status in the EU.

However, with most EU countries convinced the UK is already getting a good deal, Cameron would probably have to wage a full-on diplomatic war with no guarantee of victory. With the UK economy in a largely self-inflicted slump, he needs to get his priorities straight.

• Tories may care deeply about Europe, but no one else does – Daniel Elton, October 21st 2011