Speechwriting expert Asher Dresner reviews David Cameron’s Tory conference speech yesterday, focusing on his central argument about the debt, and why he is wrong. 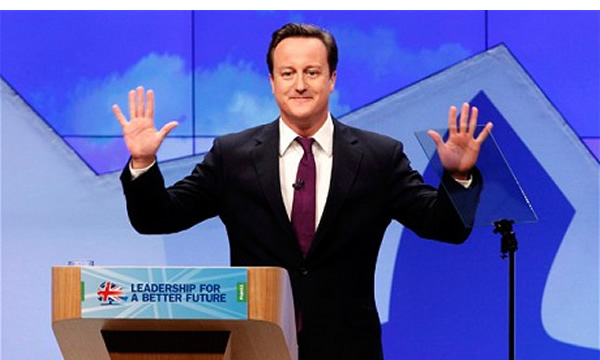 The task for David Cameron’s speechwriters yesterday was formidable.

The Conservatives are vulnerable on health (their NHS plan is retoxifying their image); vulnerable on the Big Society (most people don’t understand it, and those who do know it means asking people with ever less money and time to donate more of both); and vulnerable on immigration (even business groups are complaining Theresa May’s immigration cap is making it harder to grow).

And only hours before he was due to speak, the Office for National Statistics confirmed that, unfortunately, the economy is getting weaker. The Conservatives are increasingly vulnerable on the economy too.

His speechwriters’ task was to justify the course the government is on, and leave the party and the country feeling good about it. Their tactic was simple: sell deficit reduction, not the Big Society, as the central idea motivating this government. This tactic had at least one virtue: honesty.

The Big Society, by contrast, is an add-on. It was never the central motivating idea, it does not determine government priorities, and people knew it. So the tactic of shifting the emphasis away from the Big Society and towards deficit reduction was at least credible.

To the extent his speech contained a ‘big argument’, it was this: debt reduction is good for individuals, good for households, and good for governments. That relies on a metaphor between government finances and household finances.

That metaphor does some real argumentative work. It tries to persuade you that government and household finances work the same way. It tries to get people to think: yes, these cuts will hurt, but it’s like paying off a debt: short-term pain is necessary for long-term gain. And as long as Mr Cameron keeps people believing the pain will lead to gain, keeps people believing in that metaphor, his position will be safe.

The problem with that argument is that it’s wrong – and if only Labour could find a way to express why, it is an argument which could be a real weakness for Cameron.

It is wrong because there is only one way to reduce the deficit: the economy must grow. If it doesn’t, the government takes less in tax, so can’t afford to reduce that deficit. But history shows that cutting fast and deep – Cameron’s plan – slashes growth, except in exceptionally good global circumstances.

These are exceptionally bad global circumstances.

It is also wrong because we can only grow if people spend. If everyone in the country took Cameron at face value and paid off their debts, spending would drop, and growth would slow.

So the central tactic of the speech – trying to associate the government in voters’ minds with deficit reduction in place of the Big Society – was an understandable tactic. But it does not deserve to work. I hope Labour find the right language to take it down, and fast.

15 Responses to “Cameron’s central argument on debt is wrong; Labour needs to find a way to say so”