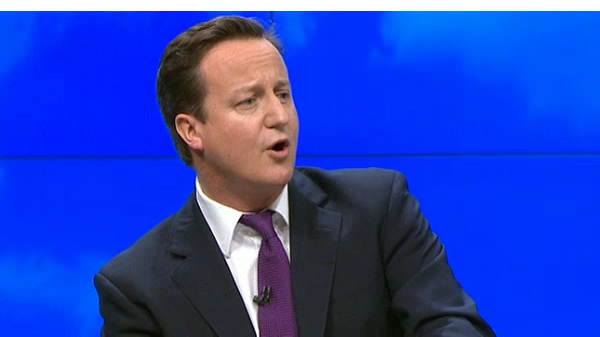 Having been wholly omitted from Ed Miliband’s leader’s speech last week, David Cameron put foreign affairs at the front of his conference speech today. On Libya, international development and the Arab Spring, he made the case for an international, interventionist policy – putting himself at odds with many in his own party but on the right side of history.

Stressing it was not only the right thing to do but was in our national interest, the prime minister said:

“This is a party – ours is a country – that never walks on by. Earlier this year some people said to me: ‘Libya’s not our concern’, ‘don’t start what you can’t finish’, and even – ‘Arabs don’t do democracy’.

“But if we had stood aside this spring, people in Benghazi would have been massacred. And don’t let anyone say this wasn’t in our national interest… Let’s be proud of the part we played in giving the Libyan people the chance to take back their country.”

One of Miliband’s only references to the world outside our borders was the bravery of UK troops in Afghanistan, a point expanded on by Cameron:

“In Afghanistan today, there are men and women fighting for Britain as bravely as any in our history. They come from across our country: England, Scotland, Wales, Northern Ireland. They now have the equipment they need. And we’re on target to bring them home by the end of 2014.

“Theirs has been a campaign of incredible courage and sacrifice, and I know everyone in this hall will want to send a message to everyone who serves and who have served. Those in uniform in our armed forces and in our police. And those not in uniform, keeping us safe from terrorism on our streets.

“We’re proud of you. We salute you. Thank you.”

And on international development, again completely (inexplicably not just on principle but especially given the heartbreaking video intro from Aung San Suu Kyi minutes before he came on stage), absent from Miliband’s speech, the Tory leader challenged the sceptics in his party and the press, insisting:

“…leadership in the world is about moral strength as much as military might. A few months ago I was in Nigeria, on a trade mission. While I was there, I visited a vaccination clinic. It was very hot, pretty basic and the lights kept going off.

“But to the rows of women, cuddling their babies, this place was a godsend. One of the nurses told me that if it wasn’t for British aid, many of those beautiful babies would be dead. In four years’ time, this country will have helped vaccinate more of the world’s poorest children than there are people in the whole of England.

“Of course, we’ll make sure your money goes to the people who need it most, and we’ll do it in a way that’s transparent and accountable. But I really believe, despite all our difficulties, that this is the right thing to do. That it’s a mark of our country, and our people, that we never turn our backs on the world’s poorest, and everyone in Britain can be incredibly proud of it.

On foreign affairs at least, plus points for Cameron, room for improvement for Miliband; there’s still a way to go before he can be imagined bestriding the globe receiving a hero’s welcome in Benghazi.

We will have reaction on the slightly less progressive domestic and economic policy elements of Cameron’s speech later this afternoon.