Colonel Muammar Gaddafi is dead. The deposed despot died of his wounds after being captured in his home town, his last stronghold, of Sirte, reports Shamik Das. 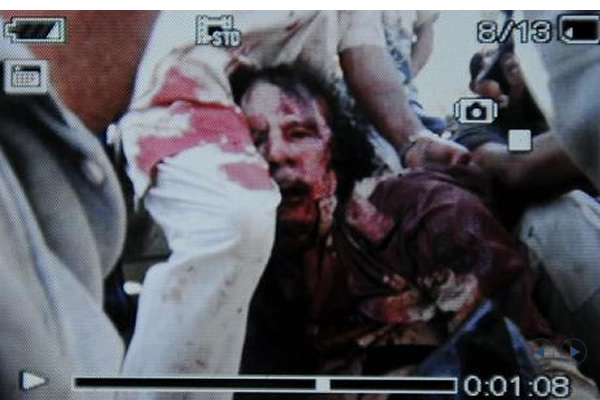 Colonel Muammar Gaddafi is dead. The deposed despot died of his wounds after being captured in his home town, his last stronghold, of Sirte. The news was confirmed by Libyan prime minister Mahmoud Jibril in the last few minutes.

His killing, which came swiftly after his capture near Sirte, is the most dramatic single development in the Arab Spring revolts that have unseated rulers in Egypt and Tunisia and threatened the grip on power of the leaders of Syria and Yemen.

Like Saddam Hussein, he was captured cowering in a hole; the Telegraph’s Ben Farmer describing:

Colonel Gaddafi was finally cornered in a drain underneath a road in open countryside to the west of the city of Sirte. Rebels said a column of vehicles tried to punch out of an encirclement at dawn. They parked up around 3-4kms west of the town, which was hit by a NATO airstrike.

Gaddafi and several bodyguards were then forced to take refuge in the drain where they were then captured and taken away by revolutionary forces.

“Our people in Sirte saw the body… [head of the NTC] Mustafa Abdul-Jalil will confirm it soon. Revolutionaries say Gaddafi was in a convoy and that they attacked the convoy.”

Cameron, Nicolas Sarkozy and Barack Obama take credit, but the biggest credit goes to the rebels, who, backed overhead by NATO, have won a decisive, definitive victory.

They have fought Gaddafi back from the gates of Benghazi to the drains of Sirte; Gaddafi is gone, long live Libya.