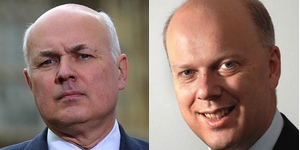 The Conservatives debated welfare reform at their party conference this morning.

As expected, the first attack is on the “incapacity benefit culture” claiming to support those who wish to work, yet no mention of the abject failure of work programmes that are only as likely to ‘help’ people as they are to find work on their own.

He called the work programme a “revolution, unlike anything we’ve seen in this country before.”  Yet according to evidence, it will help at least a third fewer of those out of work than the programmes set up under Labour, and contractors are warning that 90 per cent will not meet targets set by the DWP.  It is a programme in crisis before it has really got off the ground.

Grayling did at least challenge the idea of a vast “benefit dependency culture,” pointing out that most want to work with the right support. This is an important distinction and one I hope to hear Conservatives focus on more than the ‘scroungers’ or ‘workshy’. He also said “there is no-one more important in this than the disabled”.

It may be smoke and mirrors, but it is at least a welcome change. I argue often that the language we use makes a difference to outcomes. Maria Miller, minister for disabilities, pointed out that “the word disability covers so many different conditions,” yet sadly, Conservative welfare reforms all too often ignore those with fluctuating conditions, learning disabilities and mental health conditions.

She claimed that “we are 100 per cent committed to maintaining unconditional support for those unable to work”. Again, a nice distinction to hear, but simply not true on the ground. Re-defining disability to the point where almost no-one qualifies for this support simply leaves the slightly-less-than-totally-vulnerable betrayed and abandoned. Cutting existing DLA claimants by 20 per cent does nothing to improve support and everything to erode it.

Universal credit (UC) actually gets very little coverage as there are so many more pressing and punitive details of welfare reform that campaigners need to focus on. Nonetheless, for those on the right it is the great saviour of welfare that will wave a magic wand to eliminate unfairness, disincentives to work and will, we are endlessly told, “make work pay”.

We are told that it will make everyone better off if they work, and it certainly does go some small way to ironing out some of the highest marginal tax rates. However, if you are the second worker in a family you will, in fact be worse off under UC. Lone parents are the big “winners” but Iain Duncan-Smith is still to confirm how childcare payments will be integrated as well as council tax relief and housing. The lack of detail ought to at least give loyal Conservative members pause for thought.

There are also questions left to answer on carer’s allowance – will it be tied to the new personal independence payments, set to replace disability allowance?

UC is the great, fluffy blanket that ignores any changes made before UC is implemented. Time-limiting contributory employment and support allowance (ESA) to just one year is one of the greatest dis-incentives to work ever written into our welfare system. It penalises 700,000 working families already struggling to support a sick or disabled family member through work, and, with the means test set at just £7,500 per year, will undoubtedly push thousands into full state dependency.

Duncan-Smith actually started his speech by pointing out that it has taken his wife Betsy three years to recover sufficiently from cancer to attend this year’s conference, yet seemingly cannot relate this to the 7,000 cancer sufferers who received letters from his department last week, informing them that their ESA will end after just one year. No three years of support for the masses.

Halving support for profoundly disabled children under UC will undoubtedly make it harder for parents to maintain or afford work and the housing benefit cap is estimated to put 200,000 at risk of homelessness. Conservatives should pause to ask themselves whether UC, set to cost around £3 billion to implement, will pay for itself once these measures come into force.

On balance, I am very pleased to hear inclusive, supportive language, challenging the stereotypes of the ‘feckless, workshy on the sick,’ and if I were a Conservative delegate, I would be reassured and confident. However the devil is in the detail, and unsurprisingly, delegates will hear nothing of the millions set to lose from welfare reform, only of the increasingly few winners.