Sam Royston of The Children’s Society explains how the coalition is on course to reverse all progress on reducing child poverty since 2000. 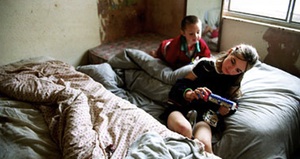 A new report from the Institute for Fiscal Studies (IFS) has modelled the implications of current government policies on child poverty rates to 2020.

Rather than meeting the government’s legally binding commitment to eradicate child poverty by 2020, the IFS predicts a rise in child poverty rates (when measured at 60 per cent of median income before housing costs) from 2009 levels of 20 per cent of children (or 2.6 million children) to 24 per cent (or 3.3 million) by 2020 – pushing some 700,000 more children into poverty.

Rather than eradicating child poverty, this would reverse all the progress on child poverty figures made since 2000.

The IFS has highlighted that much of these predicted increases in child poverty rates will result from the changes in tax and benefits announced by the coalition government over the last year and a half.

They have particularly warned that changes to the uprating of benefit entitlements, (which will see benefits increased with the consumer prices index, rather than the typically higher rate retail prices index) are likely to play a key role in increasing poverty rates.

The Children’s Society has lobbied hard to warn of the implications of some of the government’s welfare changes on particular disadvantaged groups of children. For instance we have warned of the implications of the introduction of a cap on benefit entitlements, which are likely to affect more than 200,000 children across the UK, and changes to disability living allowance, which could cut support for families affected by disabilities (who are amongst some of the most likely to live in poverty).

The IFS suggest that the figures would be even worse were it not for the introduction of the Universal Credit.  The credit will radically reform the benefits system, replacing a range of key benefits and tax credits. The Children’s Society have warmly welcomed its intention to simplify the welfare system, and to deliver increased work incentives.

However, though delivering increased support for some, many other families are likely to lose out under the Universal Credit. For example, changes to support for families with disabled children will see upwards of 100,000 children lose up to £27 per week.  Similarly, many families with young carers may see cuts in entitlement under the new system.

We hope that the government will reconsider some of these changes, so the Universal Credit works for all children and families.

The child poverty target sets a radical vision for our society, a deliberately difficult target which needs a focussed effort of political will to reach, particularly in the current economic context. The government clearly needs to do much, much more to ensure that they make this vision a reality. It would be easier to ignore the target, but to do so would be to sideline the millions of families who struggle day to day to give their children a decent chance in life.

This is something no decent society can afford.