Alex Hern explores the negative record of London Mayor Boris Johnson in office, something strangely glossed over in his speech today at the Tory conference. 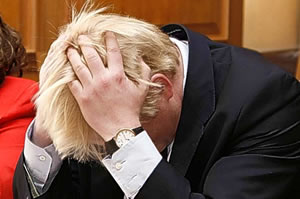 Boris Johnson was in his normal jocular mood this morning, giving a speech that was so whimsical that conference-goers could be heard chuckling at the end of literally every sentence, joke or not.

Hidden amongst the jokes and strange extended metaphors was little of substance, largely dominated by congratulations for a good year gone by – in this narrative, even the riots themselves prove Boris right, arguing that they demonstrate that the zero tolerance policing he wants is necessary.

Apparently we were all wrong, and there aren’t any complex socio-economic causes to the disorder, we just have to stop people swearing at the police and everything will be fine.

For everything like the Olympics – which is, of course, largely independent of the Mayor’s office – or planting 50,000 trees – five times the original plan, to be sure, but also five per cent of amount promised by Ken Livingstone – there are fields he will be less eager to touch upon.

He made a big deal in his speech that he would

But some may wonder just how low that level is. Johnson has already cut London’s police by almost 2,000 officers, including over 1,000 locally assigned borough police officers in the last year alone.

He may not believe that these cuts are unreasonable, but their effects are hardly positive. Since his election, the number of  young people injured by knives is up 34 per cent, common assault is up 8 per cent, and shoplifting is up 20 per cent. And for all the fuss he made of the number of Cycle Ride bikes stolen – an impressively low 18 since the program began – those who own their own bike aren’t so lucky, with bike theft more than doubled.

When it came to transport, Johnson was all about looking to the future, with a plan to offer the Treasury a “wheel deal” (it’s a pun, you see) to get more investment in London’s infrastructure. Looking forward is probably a good idea, since looking to the past highlights some of his biggest failures of all. The most obvious, to all Londoners, is his attitude to fares.

A single bus fare is up 56 per cent , and a Zone 1-4 travelcard up 23 per cent since his election – indeed, fares have risen above inflation every year since Boris Johnson was elected. And Londoners aren’t getting a better service for this money. Tube delays are up almost 10 per cent since 2008, leading to over 3 million customer hours now lost every month (PDF).

As Ken Livingstone said after the speech:

“Today we saw the real Boris Johnson – an out-of-touch Conservative, failing to put ordinary Londoners first on the issues that really affect them, from rising fares to police cuts…

“Under the Conservatives, Londoners are less well off and increasingly less safe, under a moonlighting mayor who meets bankers more than the police. People in London are feeling the squeeze but Boris Johnson doesn’t see it.”

• Why isn’t Boris coming up with any solutions to London’s housing crisis? – Jenny Jones AM,September 9th 2011

• Double-counting Boris’s latest sleight of hand should come as no surprise – Nicky Gavron AM, September 2nd 2011