Alex Hern writes about reports of strong pro-Assad demonstrations in Damascus, raising the possibility of a Syrian revolution devolving into a fully fledged civil war. 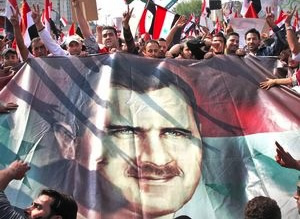 Robert Fisk of the Independent wrote this morning from Syria’s capital Damascus, highlighting the existence – worrying, for those hoping for a peaceful democratic revolution – of strong popular support for the Assad government:

Outside in the street another pro-Assad demonstration was starting, 10,000 then 50,000 – it might have reached 200,000 by midday – and there was no Saddam-style trucking of the people to the Omayad Square, no mukhabarat intelligence presence and the only soldiers were standing with their families.

How does one report a pro-government demo during the Arab Awakening? There were veiled women, old men, thousands of children with “Syria” written on their faces. Most held Syrian flags, some held the flags of Russia and China.

Although the government’s propaganda machine is wholeheartedly throwing itself behind these protesters – Fisk speaks of “bursts of taped cheering and drums and cheers and trumpets” – their support is genuine, and driven by fear:

I spoke to 12 men and women. Five spoke of relatives in the army killed in Homs. And the news from Homs was very bad. I had dinner on Tuesday night with an old friend. His 62-year-old cousin, a retired engineer, had given water to some soldiers in Homs. Next morning, armed men knocked at his front door and shot him dead. He was a Christian.

It’s also clear that the brutality of the Syrian security forces in Deraa and Homs and other cities against unarmed protesters has been a scandal, which those in the government privately acknowledge.

But it’s also transparent that the struggle in Syria now cuts through the centre of the country and that many armed men now oppose the army.

Indeed, I have been told that Homs slips – for hours at a time – out of government control. Damascenes travelling to the northern city of Aleppo can take the bus. But now more than ever, they are flying to avoid the dangerous road between Hama and Aleppo.

These are the reasons, I suspect, why so many thousands came to demonstrate in Damascus yesterday. They are frightened.

Of course, if Syrians in Damascus are scared of the rebels, the fear of government forces in Homs is just as great. As we reported on Tuesday, for instance, the state machinery of repression has now extended to using hospitals against protestors:

“At the beginning, we transported the injured with gunshot wounds to the hospitals. To our astonishment, we found that the injured were either arrested or killed,” one of the medics said.

Selena Nasser from Amnesty International spoke on Radio Five about mistreatment of protesters by doctors, saying:

“It’s not only questioning, what happens is that people who are wounded and arrive to government-run hospitals – we have consistent testimonies indicating that these people, as soon as they arrive to the hospitals, they get beaten up by hospital staff, including mainly nurses, sometimes hospital cleaners and sometimes, on some occasions, even doctors.”

Fisk closes his report with some sobering figures:

If the UN figure of more than 3,000 civilian dead is correct and if the Syrian statistic of 1,150 military deaths are correct and if the deaths of the last three days – perhaps another 50 – are true, then up to 4,200 Syrians have been killed in seven months. And that’s enough to frighten anyone.