Ed Jacobs details the latest developments in the SNP’s campaign for Scottish independence, reporting on Alex Salmond’s speech to the SNP conference at the weekend. 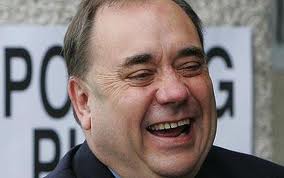 As Conservative MPs continue to obsess over calls for a referendum on the UK’s membership of the European Union, they would perhaps do best to read Alex Salmond’s speech to the SNP conference in Inverness to realise it is Salmond and his Scottish government, rather than the EU, which poses the biggest threat to the UK.

In his typically emollient style, the SNP leader declared:

“We govern – we have governed – wisely and will continue to do so.”

In doing so, he delivered a speech full of self-congratulations, pointing out at every turn where he claimed his government was different to the coalition – putting the needs of Scotland before all else.

Using every conceivable policy issue to outline his core message on independence, Salmond declared in no uncertain terms:

“The days of Westminster politicians telling Scotland what to do or what to think are over. The Scottish people will set the agenda for the future.

“These things only independence can bring which is why this party will campaign full square for independence in the coming referendum.”

Significantly though, the first minister seemed to concede that the people of Scotland will get a multi-choice referendum, with an indication that a proposition for so called “devo-max”, providing Scotland with full fiscal autonomy whilst keeping foreign and defence policy within the hands of Westminster, is likely to be an option.

“…fiscal responsibility, financial freedom, real economic powers is a legitimate proposal. It could allow us to control our own resources, introduce competitive business tax, and fair personal taxation.”

Responding to the speech, outgoing leader of the Labour party at Holyrood, Iain Gray declared:

“Despite the bluster, behind the shouting, underneath the rhetoric, we now know that Alex Salmond is absolutely terrified of the verdict of the people.

“That’s why he won’t bring forward his referendum – because he knows the people of Scotland overwhelmingly support devolution and our shared future on these islands.”

His response came as the Scotsman reported that “senior UK government” figures are closely examining the possibilities of holding a vote on independence on Westminster’s terms.

Although Downing Street has distanced itself from the report, it, together with Gray’s comments, once again highlight the urgent need to formulate a coherent message that all those in favour of Scotland remaining in the UK can sign up to and effectively communicate to the public, rather than the continued distraction over the date of the referendum.

After all, although the SNP continue to argue for a vote in the second half of the current Scottish parliament, its white paper on the subject, published in 2009, does provide its blueprint and case for an independent Scotland.

One wonders just how enthusiastic the pro-union parties should be for a vote too early when they so far do not have a figurehead to lead the campaign and need time to craft a cohesive message.

As Fraser Nelson, writing recently for the Spectator online, puts it:

“Scotland does matter. Cameron has a majority in England; it was his failure to interest Scots that cost him the election. Salmond’s stunning poll turnaround this year shows the SNP are the most effective campaigners in Britain right now. There is a strong majority for an independence referendum, even amongst unionists.

“Alex Salmond and Sean Connery will be leading the ‘yes’ side. Who will lead the ‘no’ campaign? This is the question to put to anyone who dismisses the idea of Scotland breaking away – because no one can think of a good answer.”

Whilst talk of shared bonds between Scotland and England sound nice, and referring to how Scotland would have been unable to handle the banking crisis of 2008 might sound good too, it does not amount to a serious campaign message.

What is needed more than anything is a recognition by the UK government that its policies are fuelling in Scotland a sense that a Tory government, committed to cuts beyond all else, is not inevitable, and that something without them, something better, is entirely possible, that something being independence, even if it is in all but name.

The message for those in favour of the union from Salmond’s speech is clear – don’t underestimate his determination for independence.

Whilst polling might be volatile, with Ipsos Mori reporting that 60 per cent of all those certain to vote in referendum would object to independence and polling by ComRes showing something different, the general sense is that support for the SNP and the idea of greater autonomy is on the rise, something which should matter to all sides of the pro-union movement.

As Martin Kettle, writing for the Guardian at the start of the SNP’s conference this week, warned:

“The river Ness flows deep, wide and irresistible through the town where the Scottish National party is gathered in conference this week. It’s hard not to see Inverness’s fast-flowing river as a metaphor for the party’s cause. The SNP currently carries all Scotland before it. It is a political force of nature. Like the river, it seems unstoppable.

“Scotland’s political wiseacres have learned to button their mouths rather than try to predict how or when the SNP ascendancy will end. Most of them called it wrong in 2007 when the SNP squeaked home to form devolved Scotland’s first minority nationalist government. Many got it wrong this year too, when the SNP destroyed the other parties to become the single-party majority administration that devolution was supposed to make impossible.

“Taken by surprise twice, pundits naturally hedge their bets now on the question that looms behind everything the SNP does. In the past, Scottish polls have consistently shown a decisive majority against independence, the cause for which the party exists.

“Indeed, the newly published Scottish Social Attitudes survey, conducted late last year, has support for independence at only 23 per cent, a figure which the detailed polling briefing which the SNP handed out to journalists in Inverness on Thursday somehow omitted to mention. There remains no evidence of a big shift of opinion towards independence.

“But the SNP’s successes have intimidated their opponents and observers into believing that anything is possible.”

• Supporters of the Union must wake up to the real prospect of independence – Ed Jacobs, September 5th 2011

• Calls for Holyrood reform, as ‘no to independence’ campaign gets serious – Ed Jacobs, June 13th 2011