With the coalition’s efforts to win back female voters in the news, today’s new employment stats couldn’t have come at a worse time, writes James Plunkett. 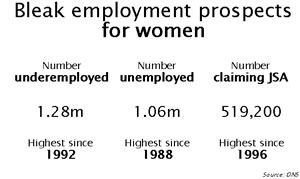 With the coalition’s efforts to win back female voters in the news today, this morning’s new employment stats (pdf) couldn’t have come at a worse time.

The figures on women’s employment are terrible.

First, underemployment – an area of particular importance to women in the jobs market – has reached historic highs:

• The number of people working part-time because they can’t find full-time work is up 70,000 quarter-on-quarter to 1.28 million, the highest figure since records began in 1992.

And on headline employment and claimant rates among women, the figures are also deeply worrying:

With the stats looking so gloomy, it’s encouraging to see the coalition at least waking up to the critical challenge of women’s living standards – as Resolution Foundation chief executive Gavin Kelly wrote in the New Statesman yesterday, and as the Guardian reports today.

And it’s also good to see others on the right – in particular those over on Conservative Home – are starting to talk seriously about the need for action.

We shouldn’t, of course, understate the amount of new thinking still needed from the government. (When a ‘Number 10 women’s employment summit’ makes the list of Downing Street policy solutions, you know ideas are in short supply.)

But let’s hope at least that all this renewed attention makes all three political parties raise their game.  n the coming months at the Resolution Foundation we’ll be publishing new work revealing just how important women’s work will be to living standards in the years ahead, and we’ll be looking more specifically at the kinds of reform that will be needed; this isn’t going to be solved overnight.