Last night, Geroge Osborne never named those he felt should be busy re-examining their view of the world. Could it be that the answer lies close to home? 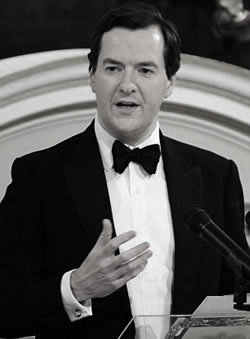 “…while we have all had to revise down our short term expectations over recent weeks, the only people who should be fundamentally re-examining their view of the world are those who thought that this time was different.

“Those whose plans depended on unrealistic assumptions of a rapid return to business as usual and a continuation of forgiving financial market conditions.”

He never named those he felt should be busy re-examining their view of the world.

So who are they? It can’t be the Labour party, the chancellor and shadow chancellor made the following statements following last year’s Q3 growth figures on October 26th 2010.

“Today’s figures show the economy continuing to grow, at double the rate the market expected and the fastest rate for the third quarter since 1999.

“Just like the second quarter, the growth is broadly based and the lion’s share is coming from the private sector. The ONS believe that the underlying growth in the third quarter was ‘broadly similar’ to the strong second quarter.

“This gives me confidence that although global economic conditions remain choppy, a steady recovery is under way.”

The second comment is obviously from Mr Osborne. It looks to me like Alan Johnson has been vindicated by yesterday’s speech. So who’s the person whose “plans depended on unrealistic assumptions of a rapid return to business as usual”?

It can’t be Osborne, because he restates his view that spending cuts will give us growth in the medium term (pace Keynes). Perhaps he’s talking about the Treasury? After last year’s:

“Treasury sources told the BBC… that talk of a double-dip recession had no basis in fact.”

Or is it the OBR?
Are they, for the fourth time, about to upgrade borrowing while they downgrade growth again?

4 Responses to ““Unrealistic assumptions”? Who is Mr Osborne talking about?”