As Scottish secretary Michael Moore tells SNP to “get on with the job”, it’s Scottish Labour that needs to sort itself out - and soon, writes Ed Jacobs. 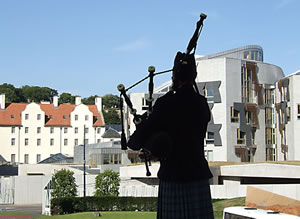 As Alex Salmond prepares next week to outline his government’s legislative priorities for the forthcoming parliamentary year, Scottish secretary, Michael Moore, has signalled a more assertive stance against the SNP administration, calling for them to “get on with the job”.

Speaking at the David Hume Institute on the future of Scottish Devolution, Moore said of the Scottish government:

“All too often, their minds appear to be focused on other things – particularly if those things are happening south of the border.”

He added that, despite the SNP continuing its demands for “fiscal autonomy”, it already had significant powers to encourage and support growth north of the border.

“Through our schools, colleges and universities it has the power to ensure that our workforce has the capabilities, skills and qualifications it needs.

“Through Scottish Enterprise, Visit Scotland, and Skills Development Scotland, to think of just 3 bodies, it has the capacity to nurture talent and attract jobs And through council tax, local business rates and what would have been a 3p income tax varying power, had the Scottish government maintained it, they also have powers to vary public revenue and public spending levels.

“On education, on health, on the economy – the Scottish people’s priorities – the Scottish government already has the powers it keeps claiming that it needs.”

Moore’s comments, however, come just months after his own party, the Lib Dems, saw their vote plummet in Scotland, reduced to a solitary five seats at Holyrood. In such a climate, opponents dismissed his remarks as akin to him being a mouthpiece for the Tories.

Speaking to Left Foot Forward, a spokesperson for Scottish Labour said of the speech:

“Michael Moore makes some interesting points and it is certainly true that the SNP too often transform standing up for Scotland into unnecessary constitutional conflict. That said, Michael Moore’s job is to be Scotland’s man in Westminster but is too often the Tories’ man in Scotland.”

In a similar vein, speaking following the leaking of sections of the speech on Tuesday, Graeme Dey, the SNP’s deputy chief whip at Holyrood, said:

“Lib Dems must be deeply disappointed every time they hear Michael Moore parroting Tory lines. The more Michael Moore stands against the ambitions of the Scottish people the more harm he does to his party.”

However, the Secretary of State’s remarks on independence, despite emphasising the UK government is in no way complacent about the risks a majority SNP government now possess to the UK’s constitutional settlement, show what might perhaps be seen as just that, a worrying compliancy.

“Whenever a referendum is held, this government will fight for a secure Scotland within a strong and prosperous UK.”

Yet, with the Lib Dems severely weakened, the Conservatives in Scotland engaged in an internal leadership contest and Scottish Labour itself engaged in an internal review of its operations, Alex Salmond will be more confident than ever, picking up and exploiting every possible grievance Scotland has with Westminster to advance his case for independence with little effective opposition.

For this reason, the former Labour first minister, Lord McConnell, has warned Scottish Labour it needs to sort the issue of the leadership out soon, telling the Herald:

“We are in the ridiculous position where the rump of liberals in the Parliament are better placed and positioned because of a new leader and we need to deal with this immediately.”

Brushing aside calls by his predecessor, Henry McLeish, that the next Scottish Labour leader had to come from Holyrood, McConnell continued:

“I want a man or a woman to come forward with a vision for Scotland in the 21st century that will not just inspire the Labour Party, but will inspire the country, and I don’t really care where that person comes from as long as the elected members at Holyrood cannot be outvoted by the elected members in Westminster and as long as the person is committed to being in the next Scottish Parliament.

“It is time for the whole Scottish party to raise its horizons. Endless debates about MPs versus MSPs, constitutional technicalities and internal party structures are not going to produce a vision for Scot- land that reconnects Labour with the majority of Scots and with Scots in every part of the country.

“We no longer have an elected constituency member of the Scottish Parliament north of a line between Cowdenbeath and Dumbarton. This is really serious.”

So far, the Labour backbench MP for Glasgow South, Tom Harris, has confirmed he may be interested in challenging for the leadership although it has been suggested that a more senior figure such as shadow defence secretary Jim Murphy or shadow foreign secretary Douglas Alexander would be his preferred option.

The Daily Record, meanwhile, has reported that the “high-flyer”, Eastwood MSP and shadow Scottish education secretary, Ken McIntosh, is preparing to announce his candidacy for the leadership once the party’s internal review is completed.

7 Responses to “Where next for the parties in Scotland?”