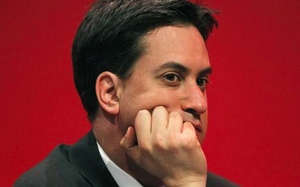 As yesterday’s round-up of reactions to Ed Miliband’s speech shows, it could be interpreted in a number of ways. Some saw it as a deliberately low-content affair, others as “actually quite funny“, while Left Foot Forward’s own Ed Jacobs saw it as laying a framework for a new agenda of fairness.

If you are part of the Tory Party, however, it appears you were watching an entirely different speech to most of the country, in which Miliband announced he wanted to ban business, nationalise everything, and eat the rich. From Norman Tebbit calling him a backward looking socialist, to Luke Johnson claiming it shows he “probably doesn’t even believe in capitalism“, the “red Ed” spin machine clearly only has one setting.

Since these commentators clearly didn’t actually watch the speech, we’ve presented below a selection of the most centrist – some may argue even right-wing – passages from it, to help them next time they try to write.

Now there are hard lessons here for my party which some won’t like. Some of what happened in the 1980s was right. It was right to let people buy their council houses. It was right to cut tax rates of 60, 70, 80 percent. And it was right to change the rules on the closed shop, on strikes before ballots. These changes were right, and we were wrong to oppose it at the time.

You know what your values are. But they are not the values being rewarded in our benefits system. We must never excuse people who cheat the welfare system. The reason I talk about this is not because I don’t believe in a welfare state but because I do. We can never protect and renew it if people believe it’s just not fair. If it’s too easy not to work. And there are people taking something for nothing.
[…]
Even after reforms of recent years, we still have a system where reward for work is not high enough. Where benefits are too easy to come by for those who don’t deserve them and too low for those who do. So if what you want is a welfare system that works for working people then I’m prepared to take the tough decisions to make that a reality.

Take social housing. When we have a housing shortage, choices have to be made. Do we treat the person who contributes to their community the same as the person who doesn’t? My answer is no. Our first duty should be to help the person who shows responsibility. And I say every council should recognise the contribution that people are making.

I am determined to prove to you that the next Labour Government will only spend what it can afford. That we will live within our means. That we will manage your money properly. As someone who believes that government can make a difference, I have a special responsibility to show you that every pound that is spent, is spent wisely. The next Labour Government will still face tough decisions. We won’t be able to reverse many of the cuts this Government is making. And let me tell you, if this Government fails to deal with the deficit in this Parliament, we are determined to do so. It’s why we will set new fiscal rules to bind government to a disciplined approach. And it’s right, as a down payment, to tell you that we would use every penny of the sale of bank shares to pay down the debt.

18 Responses to “Were Tories even watching the same speech as the rest of us?”