Ed Jacobs examines Carwyn Jones’s plans for an economic revival in Wales, bearing in mind that the government is the only Labour administration in the UK. 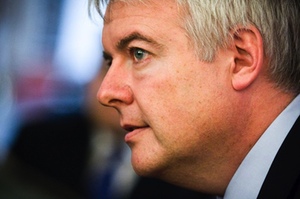 As Ed Miliband sought to lay out his strategy for getting Labour back in Downing Street, in Wales, home to the only Labour government in the UK, the party’s leader and first minister, Carwyn Jones, sought to outline what he and his party planned to achieve in Government now.

Outlining his administration’s Programme for Government for the Assembly term, ahead of next week’s budget announcement, the First Minister announced a series of policy initiatives designed, he argued to “create and fairer and more prosperous country”.

Amongst the measures unveiled was the creation of a Welsh Jobs Fund. This makes good on an election commitment made in February to establish such a scheme, designed to provide 4,000 six month long placements for young people, working 25 hours a week on at least the minimum wage.

The policy is designed to fill the gap left by the coalition’s decision to scrap the Future Jobs Fund. At the time it was first announced, the Welsh Conservatives’ then finance spokesman, Darren Miller dubbed the proposal “pie in the sky”.

Yet with recent figures showing an increase in unemployment across Wales to 8.4%, the fund will be seen as a crucial aspect to the Government’s efforts to boost employment prospects for particularly young people.

• Increasing and improving access to GP services, particularly after work hours and at weekends;

• Funding to be made available for an additional 500 community support officers;

• Increasing the volume of public sector land made available for the building of new affordable homes;

• Publication of an anti-poverty action plan by next year, bringing together all policy portfolios across the devolved bodies;

Outlining the underlying theme of the proposals, Carwyn Jones argued:

“These improvements will be firmly grounded in our uniquely Welsh approach to fairness and sustainability – a commitment that goes beyond the narrow concept of ‘greenness’, and delivers our vision for the economic and environmental wellbeing of our communities.”

Meanwhile, picking up on his election mantra of the need for delivery, the First Minister continued:

“Once a year we’ll be reporting back on progress so people can see what we’ve delivered, and how these changes have improved their lives. We need the energy and commitment of the whole country – the public sector, the third sector and our business community.  If we pull together we’ll go further and get there faster.

Dubbing the programme a “joke”, the Lib Dem leader in Wales, Kirsty Williams, berated the first minister for having left Assembly members waiting for almost 150 days for what she described as a “cut and paste” job from its election manifesto, no doubt a surprise to her that a Government should keep to the commitments it made during an election.

For Plaid Cymru, meanwhile, outgoing leader Ieuan Wyn Jones called on the Welsh government to change its strategy on the economy out of a fear about the country’s readiness for a potential double dip recession.

Speaking earlier in the week he argued:

“I believe the Welsh government has become a bit complacent and it needs to be ahead of the curve.

“What we have to do is change gear as a government here, otherwise we could be haemorrhaging jobs and potentially finding ourselves in a worse position than in the teeth of the last recession.

“At least then we did not lose public sector jobs, but now we could see this, while the private sector is not growing fast enough to take up the slack. It looks gloomy and we need a change of direction.”

Yet for all the ambitious and calls for the Welsh Government to do more or go further, the reality is simple. The Assembly and Government have no tax raising powers, relying on the block grant from Westminster, a block grant which now faces significant cuts.

Before the election Mr Jones promised to make “delivery” his party’s watchword if it secured a fourth term of office. Labour got that fourth term, but fell one seat short of an outright majority, meaning it will be dependant on the votes of opposition AMs to get legislation and budgets through the Senedd.

Mr Jones can be as clear as he likes about what he wants to do. But with public spending being cut and with no outright majority, actually doing it will not be easy.