Hundreds of thousands of families will be affected by the decision to means test ESA for those who have had disabilities since youth, writes Declan Gaffney. 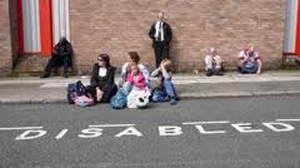 On Saturday the LibDem conference passed a motion on the government’s welfare reform bill which challenged one of its most controversial aspects, the limiting of contributory Employment and Support Allowance (ESA) to one year for people assessed as capable of some ‘work-related activity’.

The aim of the motion was to ensure that those disabled people who had paid national insurance would not be forced on to means-tested benefits after an arbitrary period.

But there is another measure in the bill which will exclude large numbers of people from non-means tested entitlement which has attracted far less attention.

It is contained in clause 52 of the bill, which will prevent hundreds of thousands of young people with lifetime or early-onset disabilities from accessing contributory ESA when they reach working age, whether or not they are deemed capable of any ‘work-related activity’.

People who have been disabled since childhood will no longer be entitled to benefit in their own right as adults but will be subject to means testing based on the income of their family.

The provision that clause 52 abolishes allowed people under 20 with work-limiting conditions to be treated as if they met the national insurance contributions for ESA.

The rationale was that people with conditions that begin in childhood may never be able to accumulate sufficient contributions to entitle them to the non-means tested benefit. Even for a system which has its fair share of anomalies, this was clearly an arbitrary exclusion.

While hardly perfect, this arrangement prevented a situation where people with lifetime or early-onset conditions would generally have less favourable entitlements than people who became disabled in adulthood.

We can get a rough idea of the numbers who will affected by clause 52 and the conditions they are living with from figures on children receiving Disability Living Allowance, the non-means tested benefit which compensates for the additional costs faced by disabled people.

There are an estimated 327,000 children under 16 currently receiving DLA. By far the most important disabling condition for this group is learning disability (41%), followed by mental health problems (10%).

While not all of these children will be eligible for ESA in adulthood, and there will be many who are eligible for ESA who are not receiving Disability Living Allowance, these figures do point to one important implication of clause 52: given that around 75 per cent of 25-34 year-old DLA recipients are also on ESA, a large proportion of those affected will have learning difficulties or mental health problems at the more severe end of the spectrum.

This may help explain why a policy which will particularly affect entitlement for people with learning difficulties could look attractive from a narrow fiscal perspective, although from a broader policy persepective, the growth of claims by people with learning disabilities represents a desirable outcome, reflecting increased life expectancy and less reliance on institutional care.

The question posed by clause 52 is why would anyone want to do this? Of course the proposal will save money: the savings could well be significant, precisely because financial support is being withdrawn from people many of whom will never be able to support themselves.

At the same time there are likely to be offsetting effects. The impacts on work incentives for other family members are likely to cut in to any fiscal savings – how many parents or partners would be as well off leaving work and claiming carer’s allowance after this change?

Some people who would otherwise have lived as part of a family will move into rented accommodation and claim housing benefit as well as possibly having greater needs for local authority support services. And demand for institutional care is likely to be swollen by those cases where independent living is not an option and where families are simply unable to meet the additional financial cost.

But even without these factors undermining any savings, and even if one completely accepted the government’s arguments for aggressive deficit reduction, there are better and worse ways of reducing public expenditure, and making long-term disabled adults dependent on their families is surely at the worse end of the range.

If they are unable to work and wish to remain in the family home, they will be imposing the burden of their maintenance on their parents and siblings. If they marry or move in with a partner, they will be bringing a huge negative dowry of long-term financial need to the relationship.

Why would we want to impose a tax on families and partners who are providing non-financial forms of support?

Why would we want more disabled adults to have to factor in the financial costs they might impose on others into critical decisions about where to live and who to live with?

Why, in a wealthy country with a functioning welfare state, should any parent ever be faced with the question of whether they can afford to have their disabled child living with them into adulthood?

I don’t believe that anyone of any political persuasion seriously believes these effects are desirable. For thirty years there has been a clear direction of policy on severe long-term disability, accepted and promoted by all the main parties: towards greater independence and community support, away from segregation, institutionalisation and enforced dependency.

Of course there will always be a need for debate about ways and means but unconditional financial support in one’s own right is one of the more uncontroversial building blocks of any strategy for greater autonomy and integration for the most severely disabled.

Clause 52 represents a major departure from the spirit of decades of progressive policy making by successive UK governments. Those who are concerned with arbitrary restrictions on contributory ESA have every reason to extend their concerns to clause 52.

Thanks to Kaliya Franklin, Richard Exell and Kate Bell for their advice on this piece. The content and opinions expressed are of course the sole responsibility of the author.

A longer version of this article is available here

43 Responses to “Yet another nasty in the welfare bill: Means testing support for the disabled-since-youth”