UNICEF today urged the government to support a Living Wage so parents don’t have to do multiple jobs on the minimum wage and can spend more time with their children. 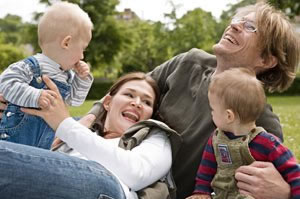 UNICEF today urged the UK government to support a Living Wage so parents don’t have to do multiple jobs on the minimum wage and can spend more time with their children. It also calls for local authorities to rethink their cuts to leisure, sport and other services so more families can afford to do the activities children crave.

The UN agency called on ministers to “show strong leadership” and take “decisive action” to help hard-pressed families, including a Living Wage for all government workers and for pressure to be applied to businesses to do the same.

“…needs to show strong leadership by taking decisive action to help families fight back against the materialism and inequality that is so pervasive in the UK.

“They need to make sure parents earn enough to spend fewer hours in work and more time with their children, protect children’s play facilities from spending cuts and consider reforming the laws controlling advertising to children.”

UNICEF’s recommendations follow the publication today of research (pdf) that sets out to explain earlier findings (pdf) that, when compared to 20 other developed nations, Britain is at the bottom for children’s well-being. It does so by qualitative comparisons between the UK, Spain and Sweden.

The report, “Children’s wellbeing in the UK, Spain and Sweden: The role of Inequality and Materialism”, concludes family life in Britain is marred by consumeristic pressures much more than in the other Sweden and Spain.

While children everywhere want stuff, children here actually get it, box upon box of it. The more time-pressed a household, the more electronics are in the home; the poorer the home, the more discarded gadgets and uncared-for toys there are. The more the children are given, the more they ask for, the longer parents work to give them things, the less time there is.

This is sad in so many ways, mainly because if you ask children in the UK what would make them happy (as the researchers did), most of them answer the same as children in other countries: they want time with their whole family, to do interesting things outside the home with family or friends, to do creative things together with people they love.

Both in Sweden and in Spain family time is prioritised over possessions and commitments: in Sweden, parents explain the difference between ‘need’ and ‘want’, buying what the children need but often getting children to save up and do housework to earn what they want. There, in two-parent households, both parents generally work, but not quite full time, so that there is plenty of time for family activities.

In Sweden and Spain, income inequality is low and brands don’t seem to serve as status symbols as they do here, but are bought for their quality (perhaps helped by the fact advertising to children under 12 has been banned for 20 years).

In Spain, where income inequality is as high in the UK, parents also often work long hours. But extended families are active, so children get to spend time with their loved ones every day. Source: The Children Left Behind, UNICEF (pdf).

The focus is for children to learn: the family’s energy and money goes towards extra classes and activities to improve children’s knowledge and abilities, while time together is woven in the very fabric of the day. Toys are few, and well looked after.

Given that the extended family has been lost to the UK for two generations now, the solution for parents is along the Swedish model: work a bit less, spend a lot less money on stuff and more time doing things with the children. And to do this we need help from the government, as UNICEF explained, with their call for a Living Wage, to enable parents to work a little less and spend more time at home.

Should this happen, parents will find it a little bit easier to do what they already want to do: what is best for our children.