Two of Northern Ireland’s most senior politicians face disciplinary action from the Orange Order for attending the funeral mass of Ronan Kerr. 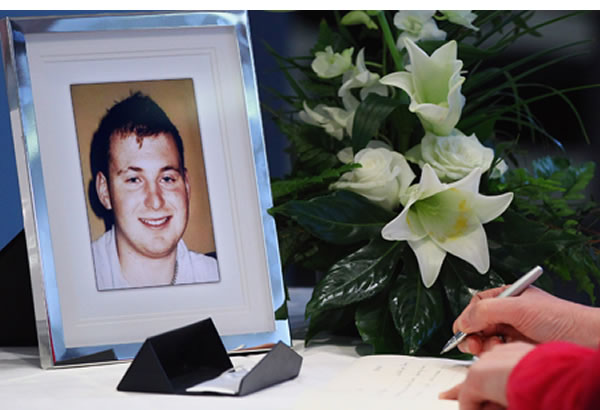 Two of Northern Ireland’s most senior politicians face disciplinary action from the Orange Order for attending the funeral mass of Ronan Kerr, the Catholic Police Service of Northern Ireland constable murdered by dissident republicans back in April, according to the Belfast Telegraph.

Tom Elliot, leader of the Ulster Unionist Party, and his colleague Danny Kennedy, regional development minister in the cross-party Northern Ireland executive, are said to have “sold their principles for political expediency” and “should have known better” than attend the funeral of a Catholic, according to a letter of complaint filed by an Orange Lodge from the loyalist heartland of Sandy Row in South Belfast.

The two politicians face a hearing for attending the service and could face expulsion.

A tenth of those expelled from the Orange Order are found ‘guilty’ of attending a Catholic religious service.

Catholics and those related to Catholics are strictly prohibited from joining the order.

The sheer perversity of this issue will leave most people dumbfounded, and rightly so. For two of Northern Ireland’s most senior political leaders to be hauled up before what amounts to a kangaroo court for the ‘crime’ of paying their respects at the funeral of a murdered police officer exposes the tensions that remain at the very heart of Northern Irish society.

The Orange Order has its origins in the political and religious ferment of the late 18th century.

Founded in 1795, the order is said to exist for the “defence of Protestantism” but was usefully employed as a bulwark against the growing threat of the United Irishmen movement which sought to unite “Catholic, Protestant and Dissenter” behind the goal of an independent Irish republic.

The Orange Order played a leading role in the sectarianism that subsequently marred Irish society and following partition in 1921, its influence became immense. Northern Ireland was memorably described by its prime minister, Sir James Craig, as “a Protestant Parliament and Protestant State”.

He also described himself as an:

“Orangeman first and a politician and Member of this Parliament afterwards.”

In the modern era, the order is synonymous with its contentious marches through mainly Catholic communities. Despite trying to soften its image in recent years, the sectarianism at the heart of the organisation refuses to disappear.

Last year its Grand Master, Robert Saulters, described dissident republican terrorists as the “Roman Catholic IRA” and in an echo of Craig, claimed Northern Ireland’s Public Prosecution Service should be renamed the:

The silver lining in today’s unpleasant tale is that the complaint against Elliott and Kennedy arose from just a single Orange lodge out of more than 1,200 across Ireland. That, in itself, represents progress, of sorts.

It is expected the men’s cases will be heard next month; an Orange Order spokesman said:

“The complaint procedure within the Orange Institution is a private matter.”