James Plunkett, secretary to the Resolution Foundation’s Commission on Living Standards, looks at the story of the recession, for the UK and the world. 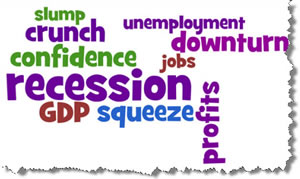 One of the toughest challenges of economic policy is effective and timely communication. Few governments will survive long if their economic message is out of alignment with what people are feeling. That’s why when ministers point to ‘green shoots’ too early you can expect a speedy retraction. But in a subtler way, it’s also why the chancellor’s job is in no small part about story-telling.

Like bad Hollywood movies, we deal with recessions in broad narrative arcs. That task has proven particularly difficult in relation to the recent downturn for a couple of reasons – both confirmed by an interesting new report (pdf) out today.

First, people’s experience of the downturn has varied very dramatically by country. Between 2007 and 2009, national declines in GDP varied from zero in Australia to 13% in Ireland.

In the same time period, the change in employment rates varied from a 6.7 percentage point fall in Ireland to an increase of 1.4 percentage points in Germany. That range of experiences makes it tough to tell a coordinated, international story.

But at a national UK level too, the story of the downturn is a tough one to tell – in part because of the shape of its impact. Despite experiencing a very large fall in GDP of 6.5 per cent in the dark days of Q1 2008 to Q3 2009, the UK experienced a relatively small impact on employment in the same period, with the headline employment rate falling just 2.6 percentage points.

Figure 1 shows what those figures meant for household income. Countries in the top left of the chart are those that saw a large fall in GDP but relatively less impact on household income in the same period. They’re the places where people might, in the early days of the crisis, have concluded ‘that wasn’t as bad as we thought it would be’.

Only three countries are above and to the left of the UK. In this – very limited – sense, UK households did not fair too badly in the midst of the storm. 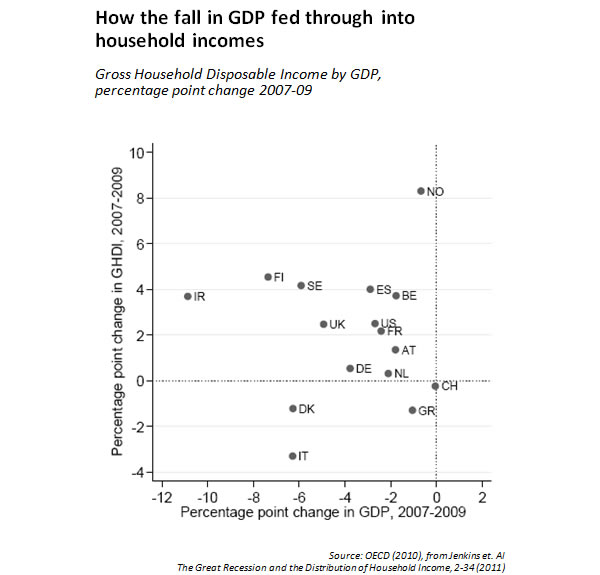 So – did Britain’s households get off lightly? Not in the slightest. Household income and employment are both ‘lagging indicators’ that see delayed impacts from a contraction in output. This time around that lag was particularly stark.

Although it held up relatively well in the depth of the crisis, falls in household disposable income have been historically sharp and deep in the recession’s aftermath.

As report (pdf) after report (pdf) has revealed in the past year, we are now in the midst of the biggest squeeze on living standards in living memory. The Institute for Fiscal Studies confirms this pattern in the chapter they contribute to today’s report: in their analysis, 2010-11 saw the biggest fall in net household income since 1981.

“The pain was most definitely delayed rather than avoided.”

Unfortunately for the chancellor, the story is now set to get worse before it gets better. In fact, the new IFS work backs our own analysis at the Resolution Foundation that shows the squeeze on living standards may well last at least a decade.

In one sense, it means Mr Osborne now has a huge challenge of public sentiment on his hands – and one that will only grow as recovery falters; in another, it means the decisions we make now – about how the pain is shared – will prove absolutely critical to limiting the long term fallout of the crisis for living standards.

4 Responses to “Telling the story of the recession”