The uprisings in Yemen have entered a third day, and show no signs of getting any less bloody – in the early hours of this morning, two protestors were killed. 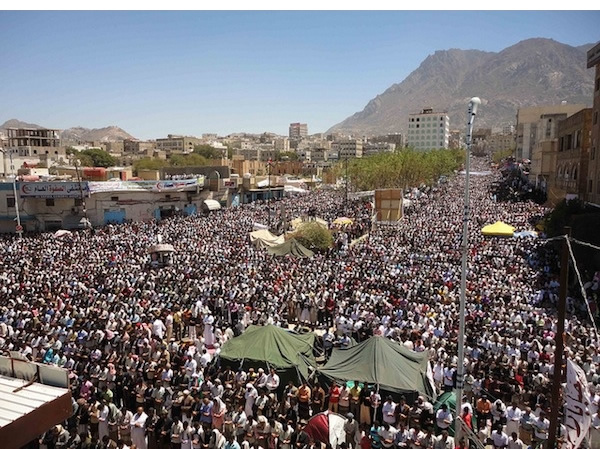 The uprisings in Yemen have entered a third day, and show no signs of getting any less bloody. In the early hours of this morning, two protestors were killed when the military shelled the camp that had been set up in Change Square in the capital, Sana’a, and Laura Kasinof is now reporting for the New York Times that the total has risen to ten for the day so far.

Three of these deaths, according to AP, are soldiers who have defected from the government’s forces, which corroborates reports from Reuters that the dynamics of the protest are shifting; what started as a confrontation between the military and pro-democracy protestors is becoming a military battle between the government and the opposition.

As with so much else coming from the Arab Spring, the horrific detail of the violence that is emerging is notable. The Telegraph has a story of a cameraman filming his own shooting; freelance journalist Tom Finn tours the aftermath of the shelling; and Adam Baron tweets about the difficulty of finding any photos which aren’t too gory to print.

Journalism in the area is not getting any easier either; as well as the murder of Hassan Waddaf, documented above, the BBC World Service has expressed fears over the safety of its staff after the Yemeni deputy information minister called for the arrest of BBC Arabic reporter Abdullah Ghorab for filing untruths and false news stories.

“Abdullah Ghorab is a well-respected journalist who is very committed to the BBC’s principles of impartiality, balance and accuracy. It is vital for all journalists to be able to report freely on events in Yemen without fear of harassment and intimidation.”

With violence looking set to continue in the capital, residents seem to be fleeing to the relative safety of the country, with Reuters reporting scores of pick-up trucks and cars loaded with families and personal belongings were seen driving out of Sana’a in the early hours.