Lib Dem and Tory MPs are beginning to wake up to the reality of the Parliamentary Voting System and Constituencies Act, that will result in 50 fewer seats. 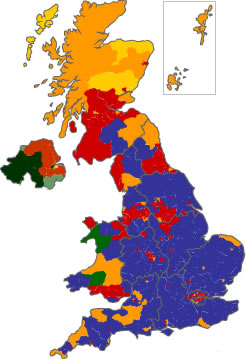 Liberal Democrat and Conservative MPs are beginning to wake up to the reality of the Parliamentary Voting System and Constituencies Act, that will result in 50 fewer seats.

Lib Dems Charles Kennedy and Danny Alexander may have to fight it out for one Highlands seat, with leading Tories Graham Brady (chair of the 1922 Committee), sports minister Hugh Robertson, housing minister Grant Shapps, and even George Osborne all facing heavy redrawing or even abolition of their constituencies.

“…minds are turning to moves to redraw the UK’s electoral map, as plans are published to scrap 50 of the 650 parliamentary constituencies and alter the boundaries of the vast majority of the rest.

“Scores of party colleagues will suddenly find themselves pitched into battles to contest merged seats, while hundreds of MPs will be fighting such radically revised constituencies that previously comfortable majorities cannot be guaranteed…

“The planned overhaul has left MPs of all parties anxious and apprehensive. That mood could turn to fractiousness among backbenchers – particularly those with little chance of preferment – who see their survival in peril.”

The seat cull was agreed by the Lib Dems in return for the Tories agreeing to the Alternative Vote referendum; it could turn out to be a win-win for David Cameron and a big lose-lose for Nick Clegg, the referendum lost and the Liberals set to lose out most from the constituency redrawings and abolitions required to bring about a reduction in the size of the Commons to 600 seats.

As Left Foot Forward reported in July 2010, and which the Lib Dems only seem to be grasping now, Mr Clegg may come to regret his constitutional reform compromise:

“The Liberal Democrats will be the party most affected by the cut in the number of seats announced by Nick Clegg on Monday, research undertaken by Left Foot Forward reveals…

“More than 40 per cent of Lib Dem seats (23 out of 57) are isolated, surrounded entirely by seats of opposing parties – including Mr Clegg’s Sheffield Hallam constituency – while his coalition partners are the least likely to be affected: just 1.3 per cent of Tory seats (4 out of 307) are isolated. For Labour, the figure is 4.7 per cent (12 out of 258).

“As a consequence of the boundary review, some seats will stay the same size while others will get much larger, which we haven’t accounted for. On a uniform enlargement, however, it is clear the Liberal Democrats stand to be affected the most from enlarging constituencies to take in areas of non-Lib Dem held seats.”

On these pages, we’ve long highlighed the flaws in the coalition’s constituency redrawing plans, namely that they appear undemocratic and partisan; smack of a return to Tory gerrymandering; and will prevent equal representation, fail to correct distortions in the electoral system, and result in a less representative Parliament, delaying and slowing progress towards gender equality in the House of Commons.

The Boundary Commission’s initial proposals for redrawn boundaries will be published next week.