Nick Clegg will attack “vested interests” in his speech this afternoon, hitting out at Labour’s union link - yet saying nothing about the Tories’ City links. 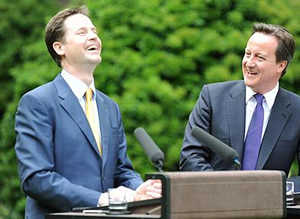 Nick Clegg will attack “vested interests” in his conference speech this afternoon. He will hit out at Labour’s union link, the historic link with millions of ordinary workers – but he will fail to mention his coalition partners’ dependence on the City, a source which, in 2010, accounted for more than half of Tory party donations.

The Liberal democrat leader will say:

“In our long, proud liberal history, we have never served the media moguls, the union barons or the bankers. We do not serve, and we will never serve, vested interests. We are in nobody’s pocket…

“Of all the claims Ed Miliband has made the most risible is that his party is the enemy of vested interests… Today Labour is in hock to the trade union barons – after their government stipend, 95% of Labour’s money comes from unions. Most of it from just four of them.

“Let me be clear: the values of trade unionism are as relevant as ever. Supporting workers. Fighting for fairness at work. But I don’t think the unions should be able to buy themselves a political party.”

Clegg will go on to claim “every previous attempt” at party funding reform:

“…has been blocked by the vested interests in the other two parties.”

As Left Foot Forward reported in February, the real vested interests, about whom he says not a word, are the forces bankrolling Clegg’s friends in the Conservative party, a Tory party loath to deal with bonuses, regulate the banks and maintain the 50p tax:

…more than half of Tory funds come from the City – double the proportion it was when David Cameron became leader.

Research by The Bureau of Investigative Journalism found that £11.4 million of the Conservative party’s £22.5m total cash donations last year came from the financial services industry – 50.79 per cent; this compares to £2.75m out of £11.1m (24.67%) when Mr Cameron became Tory leader…

The BIJ names the ten biggest donors as:

If Mr Clegg is really concerned about taking on the vested interests, in politics as well as the City and the media, he should start by looking at his Tory masters – that’s if he dares stand up to them.